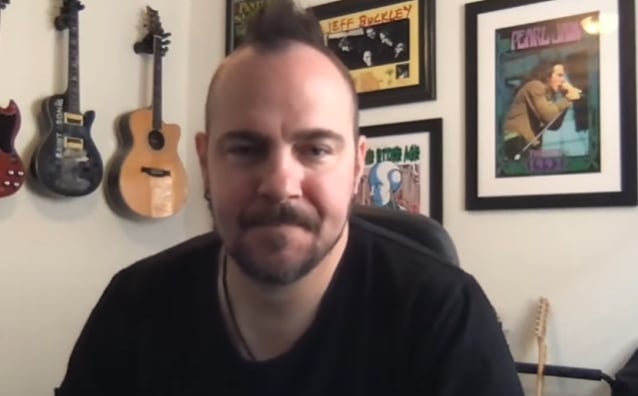 ADAM GONTIER Is Open To Reunion With THREE DAYS GRACE, Says It Will 'Likely' Happen 'At Some Point'

Ex-THREE DAYS GRACE singer Adam Gontier says that a reunion with his former bandmates is "likely" to happen "down the road at some point."

The 44-year-old Canadian-born musician made his comments just a couple of weeks after he and two members of the band's current lineup, bassist Brad Walst and his younger brother, vocalist Matt Walst, were inducted into the Norwood District High School Hall Of Honor in Norwood, Ontario.

Asked in a new interview with Rock Feed if he would be open to working with THREE DAYS GRACE again now that he appears to be on good terms with his former bandmates, Gontier said: "You know what? Yeah. I mean, for sure. We've all grown up. It's been a while. There's no hard feelings or anything like that. We're all in touch now and we talk and text and stuff.

"We haven't really talked about doing anything — not yet anyway — but I feel like something like that is most likely down the road at some point," he added.

When interviewer Brian Storm noted that Adam's reunion with THREE DAYS GRACE would be a "big" deal, Gontier said, "And it would be a lot of fun." Storm then reiterated that the reunion would be "very big," to which Adam said: "Probably would be. You never know, man. We haven't really talked about it. But, yeah, I guess we'll see."

Earlier this month, Brad Walst spoke about reconnecting with <>Gontier at the Norwood District High School event in an interview with Tommy Carroll of the 97.9 WGRD radio station. He said: "It's funny 'cause the high school's been calling us for years. And, obviously, we've all had kind of different schedules, and Adam's been doing his thing and we've been doing our thing. And until recently, to be honest, we hadn't really spoken that much — we'd text and stuff. But Adam's moved back to the area, and he's got a great family and a great wife. And we've all kind of been chatting and hanging out. Yeah, I called him and just said, 'They want the three of us' — they want Matt, Adam and myself. And everyone agreed, and it was, like, 'Okay, let's do this.' So it was pretty cool to see [our] high school, where you grew up… It's nice to be acknowledged."

Gontier is currently a member of SAINT ASONIA, which also features STAIND guitarist/founding member Mike Mushok. The band released a new EP, "Introvert", on July 1 via Spinefarm. The quartet is rounded out by Cale Gontier (bass) and Cody Watkins (drums).