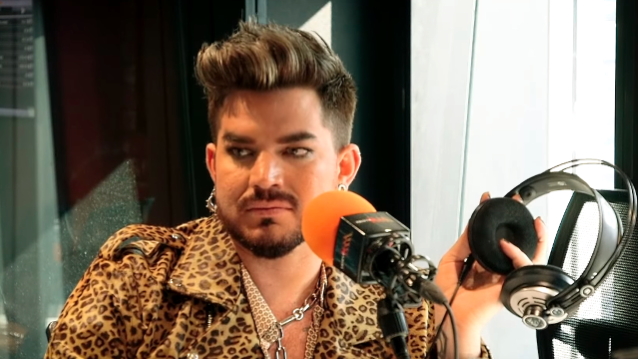 ADAM LAMBERT On Late QUEEN Singer FREDDIE MERCURY: 'I Hope That In Some Way I Can Carry On His Spirit'

Adam Lambert says that he is "lucky" to be able to pay tribute to the late Freddie Mercury by touring the world with QUEEN.

Lambert, drummer Roger Taylor and guitarist Brian May first shared the stage during "American Idol" in May 2009 for a performance of "We Are The Champions". They teamed up again in 2011 at the MTV European Music Awards in Belfast, Ireland for an electrifying eight-minute finale of "The Show Must Go On", "We Will Rock You" and "We Are The Champions" and in the summer of 2012, the singer performed a series of shows with QUEEN across Europe as well as dates in Russia, Ukraine and Poland. They have since completed a number of tours and performed at some of the biggest festivals in the world.

Lambert, who was the openly first gay man to have a No. 1 album on the Billboard 200 chart, spoke about his ongoing stint with QUEEN in a recent interview with Jane Kennedy and Mick Molloy of Australia's Triple M radio station.

He said (see video below): "I'm so lucky that I get to pay tribute to [Freddie] and celebrate him as an artist and as a person, as a writer, as a singer. And I think I relate to some of the stuff that he, obviously, has gone through; I can kind of draw some comparisons there. And I hope that in some way I can carry on his spirit. I think that there are certain intentions with which those songs are supposed to be sung, and I try to go there. And I've asked a lot of questions and learned a lot about him, and I really try to keep him in the forefront of my mind. Not to imitate, but to do it for him — kind of, like, celebrate him."

This spring, QUEEN + ADAM LAMBERT will play their first European dates since the worldwide box office sensation that was the "Bohemian Rhapsody" film. The biopic introduced QUEEN's music to new audiences with record-breaking results. Apart from becoming the highest-grossing music biopic of all time, in the U.K., it is also No. 1 biggest-selling film of 2019 on home release.