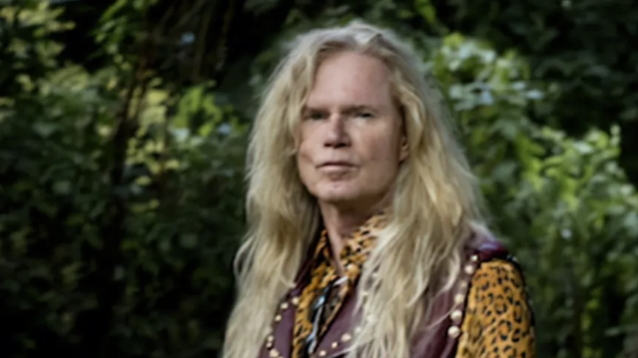 Adrian Vandenberg has admitted to a disagreement with David Coverdale over the 2021 reissue of WHITESNAKE's "Restless Heart" album. The guitarist made the revelation while chatting to Eonmusic in late August at this year's Stonedead festival in Newark, United Kingdom.

Vandenberg, who was a member of WHITESNAKE from 1987 to 1990, and again from 1994 to 1997, also talked about the injury which prevented him from taking part in the recording of the band's 1990 release "Slip Of The Tongue".

Said Adrian: "I had a serious wrist thing. I was in a hotel working on the guitar parts, because I was already recording the rhythm guitars, and I felt like somebody was holding my wrist, like there was a tight band. I had all kinds of theories about it, and the thing was, there was so much pressure on it because of the success of ''87' [the self-titled, multi-million selling WHITESNAKE album], so I told David, 'You know what? I've got to go home. I've got to take care of it.' So we talked about it and, 'Well, we need somebody to play the parts,' and we both came up with Steve Vai."

He affirmed: "I know all the theories that say it's all like a bullshit thing; it wasn't."

Going on to talk about his work on the 2021 reissue of "Restless Heart", which was originally released in 1997 under the DAVID COVERDALE & WHITESNAKE banner, Vandenberg admitted that although he was involved with it, he and Coverdale had differing visions for how it should sound.

"The thing was, we ended up in a disagreement about the direction of it," he said. "So Joel [Hoekstra, current WHITESNAKE guitarist] doubled the rhythms that I did on the album to beef it up a little bit."

Elaborating on how "Restless Heart" was originally recorded, he said; "It was weird because the demos that we made for 'Restless Heart' were also more back to WHITESNAKE being a blues rock band. I've always been a WHITESNAKE fan, so I know exactly what WHITESNAKE is supposed to be about, and that's what I discussed with David at the time. We both decided, you know what? It's a weird period, it's the '90s. Let's bring WHITESNAKE back to what it originally is, like a blues rock band without too many frills going on, too much polishing and stuff. Like in 'Too Many Tears'; that’s where David especially excels. He's got this big, bluesy voice, low register, and that's just great. And I'm really happy that we recorded that album."

In the wake of WHITESNAKE's massive late 1980s global success, Coverdale set out to record his third solo album in 1995. However, the plan was derailed when pressure from his record label forced him to change course and release "Restless Heart" under the DAVID COVERDALE & WHITESNAKE moniker. Despite the changes, the 1997 album was a Top 40 hit in the U.K. Surprisingly, the record was never released in the U.S. until Rhino's reissues in October 2021.

Last year, Coverdale told Eonmusic about the making of "Restless Heart": "I called Adrian, who's one of my dearest friends and a fantastic collaborator, and said, 'Right. I'm going to do a solo album. Are you doing anything? Do you want to fly over?' And he did, and he lived with us for about six months. It was amazing and another testament to how strong our friendship is — a great cook, great wine, a raconteur, a lovely man, superb guitarist, and you couldn't ask for a better songwriting partner. So, we were near the end of this thing, after doing the extravagant albums like 'Slip Of The Tongue' [1989] and 'Coverdale Page' [1993], I wanted it to be a bit more organic, strip it down a little bit."

Regarding how "Restless Heart" ended up being released under the DAVID COVERDALE & WHITESNAKE banner, Coverdale stated: "It was supposed to be a David Coverdale solo album after I'd worked with COVERDALE PAGE, and the guys at EMI promoted the idea of this working under my own name, which I've got to say I wasn't that enthusiastic about. I like being in a band; I like being in WHITESNAKE. Obviously, there's going to be elements of WHITESNAKE because I'm the principal writer for the band, but the circumstances, the new executives came in from EMI, and at least showed me the respect of flying over to Reno and sitting down to listen to the album. I bought a case of Puligny-Montrachet so we're all quaffing that, and then they asked if they could have a word with me, and I thought, 'Aye aye, what's this?!' They said, 'We want this to be a WHITESNAKE album,' and I'm going, 'But it isn't — not as it is.' And they said, 'Well, contractually, we can demand that, and we'd rather you were in agreement.' So I said, 'Fine.'"

As for why he felt that "Restless Heart" would not work as a WHITESNAKE album, Coverdale explained: "I felt the songs were really strong, but if it was a WHITESNAKE album, I wouldn't have used girls on it [female backing singers], I wouldn't have done 'Stay With Me Baby' [Lorraine Ellison cover], and 'Don't Fade Away' very likely would not [have appeared on it]. I sat with Adrian and Michael [Shipley, mixer] going, 'Well, we can turn the guitars up a bit, we can turn the drums up a bit,' but I always felt it wasn't doing it good service. And then the mastering was tough, and even more different executives came in, and it was just a really challenging record, so revisiting it was just an utter pleasure for me."