This summer's hottest ticket will go on sale to the general public starting on Saturday, April 12 through the Live Nation mobile app and at LiveNation.com. The first round of tour dates are below with additional dates for a second leg to be announced shortly.

"Looking forward to inciting a riot and building the tribal bonfire even higher — it's a win-win with Slash," says Steven Tyler.

Says Joe Perry: "The writing's on the wall — AEROSMITH and Slash. We're gonna let rock rule this summer. Catch us if you can."

The excitement all started when Joe Perry took it to the streets with Risk, the famous graffiti artist, last Thursday night for "Let Rock Rule" and things began ramping up mysteriously when the AEROSMITH logo, and the tour announcement date of 4.8.14, was bombed on various buildings in downtown Los Angeles by Joe Perry and Risk. Following this, AEROSMITH drummer Joey Krammer stepped up the momentum and went to Downtown Austin with street artist Chunk to continue the "Let Rock Rule" tagging.

Perry says: "I have always felt that AEROSMITH was America's hometown band and what better way than to take matters into our own hands to spread the word."

Earlier today (April 8),Steven Tyler and Joe Perry revealed — on the Ryan Seacrest radio show — that they would perform a free set to announce the "Let Rock Rule" tour. AEROSMITH, with a special guest appearance by Slash, played a roof-raising set for the assembled crowd at the Whisky A Go Go, the historic Los Angeles venue where they performed their first L.A. gig in 1973.

AEROSMITH's North American summer dates will follow the band's overseas dates, kicking off May 14 in Istanbul, Turkey and will hit 16 countries including stops in Russia, France, and the U.K. before wrapping July 2 in Kiev, Ukraine.

Slash is currently working on his third solo album with his band MYLES KENNEDY AND THE CONSPIRATORS. The follow-up to 2012's "Apocalyptic Love" is expected to arrive in September. 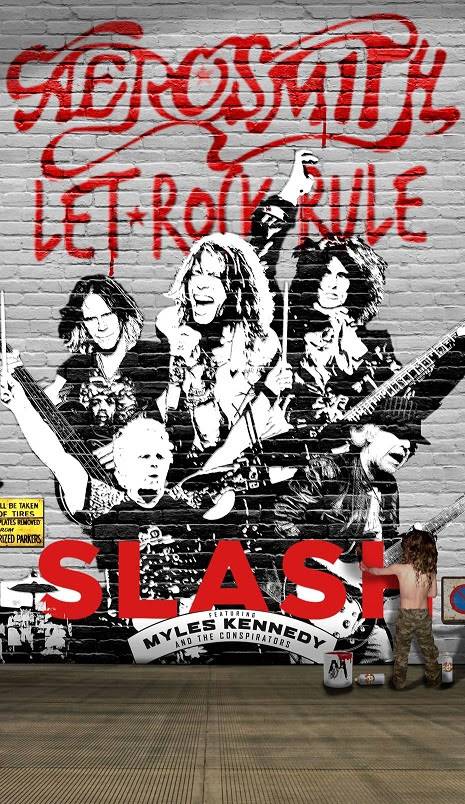