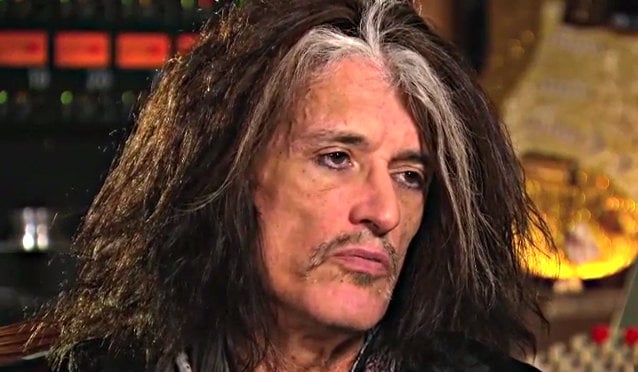 AEROSMITH guitarist Joe Perry's autobiography, "Rocks: My Life In And Out Of Aerosmith", on October 5, 2014 via Simon & Schuster. Perry is working with author David Ritz, who has written books with B.B. King, Jerry Wexler and Bettye LaVette.

"It's going to be my story, but it's also entwined with AEROSMITH and relationships there and the how and the why of that kind of stuff," Perry said last year.

"People have been asking me about it for the last probably five or 10 years… I'll definitely take a different path than the other guys, the way they put their books together. I read probably 40 biographies and autobiographies, musical ones. I can see how some worked and some didn't. I hope this one works. There's a lot to fit into 600 pages or whatever it's gonna be. I'm pretty excited."

AEROSMITH singer Steven Tyler's "Does The Noise In My Head Bother You?" autobiography was issued in 2011, while the band's drummer, Joey Kramer, had his own tale, "Hit Hard: A Story Of Hitting Rock Bottom At The Top", published in 2009. AEROSMITH bassist Tom Hamilton is also working on a book.

AEROSMITH's new album, "Music From Another Dimension!", arrived in November 2012 via Columbia Records. The CD was helmed by producer Jack Douglas, who previously worked with AEROSMITH on classic early albums like "Toys In The Attic" and "Rocks" as well as on 2004's "Honkin' On Bobo".