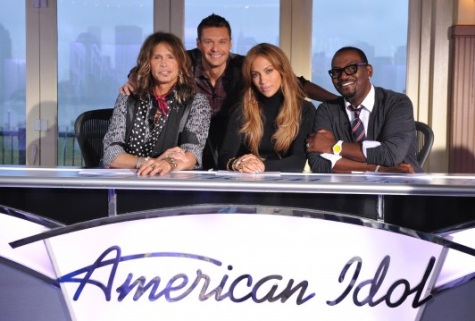 AEROSMITH Singer: I Didn't Tell My Bandmates I Was Joining 'American Idol'

AEROSMITH singer and "American Idol" judge Steven Tyler was interviewed on yesterday's (Tuesday, January 17) edition of "The Ellen Degeneres Show". In the one-and-a-half-minute clip below, Steven talks about how his bandmates felt about him joining "American Idol" as a judge.

Randy Jackson, Jennifer Lopez and Tyler traveled to Savannah, Aspen, Galveston, Pittsburgh, Portland, San Diego and St. Louis in search of contestants with the raw talent and potential to become the next "American Idol."

In a 2010 interview, Kid Rock called Tyler's decision to become a judge on "American Idol" "the stupidest thing he's ever done in his life. He's a sacred American institution of rock 'n' roll, and he just threw it all out the window. Just stomped on it and set it on fire."

Rock added: "I think whoever's advising him ... we should bring back the guillotine, or whatever they call that thing. And if it was himself, he needs some serious counseling. I love him to death, but I gotta speak the truth."

Sixx pointed out that the AEROSMITH frontman is "a real artist...he knows how to write songs, he plays instruments; he's one of the greatest singers and one of the greatest frontmen of all time. So who's better to judge somebody then Steven? There should be more Steven Tylers on there!"

Sixx added that he chatted with Tyler about potentially finding "the next Jimi Hendrix, the next Janis Joplin" via "Idol". "This is a positive thing for music," he insisted. "This is a pipeline that we usually don't have. . . I do know this: Steven is doing a forward-thinking, really cool thing."

GODSMACK singer Sully Erna also came to the defense of Tyler, telling a Detroit rock station of Steven's decision to join "Idol", "I think it's brilliant. Beyond good. I think he's gonna be the male Paula Abdul, 'cause he's a little bit dingy, you know what I mean?! He's probably all pilled up, and he's gonna be funny. I mean, he's witty, he's really witty."

Erna added, "It's supposedly the right thing to do is to rag on a show like that, 'cause it's so popular, and everybody that has a problem most of the time, they have a problem with something that's really popular — it's the envy/jealousy thing . . . I think it's brilliant that Steven Tyler is gonna be one of the judges."

As for Rock, Erna said, "Kid Rock needs to shut up. This is gonna be great for TV, man."

Tyler's "Idol" gig stunned his bandmates when it was announced. Bassist Tom Hamilton said he'd never watched "American Idol" and that the band found out about Tyler's involvement from its management. Guitarist Joe Perry voiced his displeasure in public, calling the program "one step above ('Teenage Mutant') 'Ninja Turtles'."