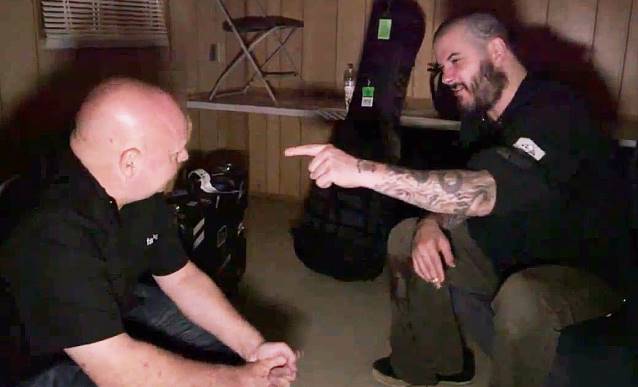 PHILIP ANSELMO: 'I Would Be In The Best Shape Possible' For PANTERA Reunion With ZAKK WYLDE On Guitar

During an interview with Matt Pinfield of Fanpass at last weekend's Rock On The Range festival in Columbus, Ohio, former PANTERA and current DOWN singer Philip Anselmo was once again asked about the possibility of a PANTERA reunion with Zakk Wylde (BLACK LABEL SOCIETY, OZZY OSBOURNE) filling in for the late "Dimebag" Darrell Abbott on guitar.

"I think the situation would have to be correct," Anselmo began before Pinfield interjected that Zakk would be the perfect guy to step in for Dimebag. "Yeah, yeah, yeah. No doubt," Philip agreed. Anselmo continued: "We [DOWN] are on tour with fucking BLACK LABEL SOCIETY right now, and don't ever underestimate the power of conversation between Zakk and I. And I know [former PANTERA bassist] Rex [Brown] is a smart man. But at the end of the day, there would have to be a meeting at a table — or without a table — between Rex, Vince [former PANTERA drummer Vinnie Paul Abbott] and I, and there would have to be a bigtime understanding between the two of us [Vinnie and Philip] before anything happens at all. Otherwise I think… There is a great percentage of me that says, 'This generation deserves it. Let's do it.' And then there's a reservation in me that says, 'You know what, man? Legacies get passed down. This, that, the other. Maybe we should leave it alone and just let it be part of lore and the history and whatnot.'"

Later in the interview, Anselmo once again spoke about a hypothetical PANTERA reunion, telling Pinfield, "If there was ever a proper presentation, like, OK, PANTERA is back together, Zakk's on guitar, that would be a massive feeling. That would be outrageous. And I would go to war. I would be in the best shape possible."

After Pinfield pointed out to Anselmo that he remembered seeing the singer backstage during PANTERA's prime years working out in preparation for the live show, Philip said: "I had boxing coaches and all that shit with me. But, you know, after I injured my back, things got really vulnerable for me. And that was a very bad feeling for me. I felt like Superman one time and then, cut in half. Whatever, man. Hey, you get dealt the fucking card you get, and you play it. And I lost a bunch of rounds. But I think the reason why we're sitting here today having this conversation, I might have won a couple too."

During a September 2013 interview with Artisan News, BLACK LABEL SOCIETY mainman Zakk Wylde was asked about the possibility of a hypothetical PANTERA reunion with him filling in for Dimebag on guitar. "It'd be up to Vinnie, Phil and Rex — they're the guys that make everything happen," he said. "So if they were all gonna do it and honor Dimebag and [if they said to me], 'Zakk, would you wanna honor Dime and do Dime's parts?' Of course, I was a pallbearer for him — I laid him to rest — so, of course, I'd say, it would be a beautiful way to honor him and stuff like that. And to celebrate all things PANTERA and what they achieved. 'Cause they changed the game, as far as extreme metal goes. I mean, they're the kings of it. But it's up to the fellows. Then it would just be me woodsheddin' 25-8, learning all of Dime's parts, you know what I mean?! Yeah, but like I said, as far as I'm concerned, it would just be honoring Dime. Like with the Yankees, you honor… everybody's wearing Thurman Munson's '15' for that day, just because we're honoring Thurman's greatness. So it's the same thing, man."