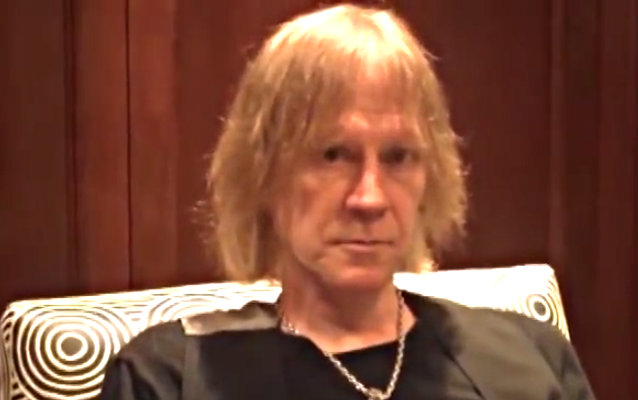 AEROSMITH's TOM HAMILTON Talks About His Health, Touring The World And Possibility Of New Music

RockMusicStar recently conducted an interview with AEROSMITH bassist Tom Hamilton. A couple of excerpts from the chat follow below.

RockMusicStar: During the last AEROSMITH tour, you had to take some time off due to health-related problems. How are you doing now and how have you been feeling?

Tom: I've been feeling really good, now. I had a very rough year last year. Some of the side effects and after effects of having had cancer a couple times caused some situations that really hit me hard last year. It takes a long time to explain, but I was going through that and then I got pneumonia. So I left the tour and came home, and then that was thankfully resolved rather easily. But I lost a ton of weight last year and I was really unaware of it while it was happening. It's a real strange thing on how your weight can go either way, without realizing it. But what happened with me, when I had cancer of my throat, it made eating kind of a pain in the ass and dangerous. I would think about not having lunch or just trying to avoid meals, and I lost 10 pounds without even realizing it, and it weakened my body. So I had to really think about it, and had to plan what I was going to eat and when. So, now I have gained the weight back and even started going a little too far the other way, because all of my jeans are getting too tight on me. [Laughs]

RockMusicStar: I was looking at your upcoming tour dates and you will be playing in some interesting places such as Istanbull, Turkey and Moscow, Russia. When you travel and perform in countries such as these, do you ever get a little nervous for your safety? Especially considering our current relationship with Russia.

Tom: Well, I don't think we were ever really in a situation when we did shows over there, like we are now. You're right, there is a lot of political drama going on in the Ukraine. I'm really hoping that by time we get to Russia that their not pissed off at us. [Laughs] But I think that, as musicians, we get a free pass with all of that stuff. It's definitely interesting. There are a lot of contentious politics going on over there now. We had to postpone one of our dates on the upcoming European tour because of the unrest and I hope that we eventually get to play it. But who knows with what's been going on. It's a little weird right now.

RockMusicStar: Being in such a popular band, you're almost like an ambassador in a way. You're respected and loved as a musician. People love AEROSMITH internationally, but you're still an American. You could really sway a lot of people in these countries.

Tom: It's really fascinating. There are some counties were our fans are insane. They really love the band and respond like you would not believe. We've played a lot of countries during the last few years that are developing counties that never had the type of economy that would support American bands coming down there. And now we go over there. We bring a little chunk of America when we are down there. We know the irony of some of the counties having a very uncomfortable history with America, but they are now friends. Seeing the big smiles on the faces of the people singing our songs is unbelievable. And you know what? People like Americans a lot more than media would have you believe. When it's person to person out on the street, people don't just outright hate Americans. If you watch too much news, you will think they all hate us. It's just not true.

RockMusicStar: That's really interesting. Many Americans do not get to travel as extensively as you and get to see this first hand. My perception was that they all hate us and want us all dead.

Tom: It really isn't that way. Yeah, maybe it's a bit of an artificial situation that I'm in because I'm in the band. And people are happy to see us, but as a general thing that I've noticed is that people like Americans. They love what we represent and I guess they can be a little frustrated when we don't act like the way they dream of what our country is. A big part of the world depends on America doing our thing and doing it the way that we do it. It's a big reason why the world works that way that it does, as far as the global economy and geopolitics.

RockMusicStar: Do you think that AEROSMITH will release another CD anytime soon?

Tom: I hope soon. But I really don't know what we are doing because we no longer have a record contract. We are finished with Columbia. So, there is nothing written in stone. We'll see what the fans want. Do they want us to write a whole album or will they be happy if we just release a new song every now and then, or maybe just an EP? Because now you can do it anyway you want. But when we do it, it will be the smart way.

Read the entire interview at RockMusicStar.