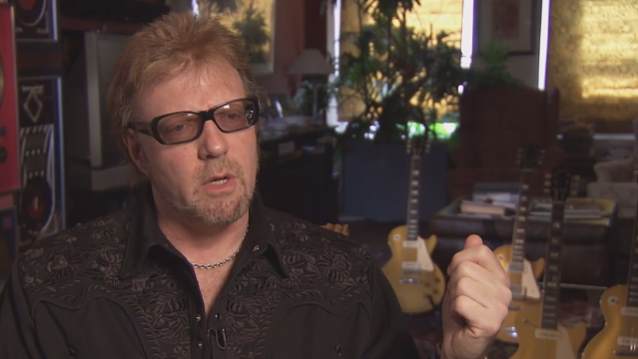 TWISTED SISTER's JAY JAY FRENCH: 'I Do Not See Any Reason In The World To Record' New Studio Album

Full Throttle Rock recently conducted an interview with TWISTED SISTER guitarist Jay Jay French. A couple of excerpts from the chat follow below.

Full Throttle Rock: Every band hopes to find a charismatic, hard-working, energetic frontman like Dee Snider. There must have been times when you thought you had struck gold, can you share your thoughts on him and his contribution to the band.

Jay Jay French: He is certainly, I think, one of the most underrated frontmen. I do not think he gets the respect he deserves. I think he is better that David Lee Roth, and no question better than Ozzy [Osbourne]. I mean, he is better than all of them. In terms of an entertainer, he is more responsible; he understands what he is supposed to do better than these other bands and that is really an important factor, he really gets what you are supposed to do as a singer, as being an entertainer, and he takes his job very seriously. He does his vocal exercises every day for, like, two hours before he goes on stage. He has done this from the day I met him and he has always taken a very professional approach to the fact that "I am a performer and I get paid to perform and I am going to be on that stage at this time and I am going to deliver." I mean, how many frontmen just do not do it? They take their audience for granted. He does not take his audience for granted, so he works really hard at what he does. He wrote some great, great songs, although he has not written, by his own admission, except for the song "30", he has not really written a song in about 20 years. I think he just decided he did not have anything to say anymore, I believe that is what he has said in interviews. But when I am on stage with him, I do not think there is a better frontman out there. That is just my opinion. I just do not see a better frontman than Dee.

Full Throttle Rock: I know that in the past Dee has been very strong on having no desire to record a new album and try and regain past glories. Is that still the band's position today?

Jay Jay French: Well, there is no point recording. I think that is an old-school idea. Why? No one buys it. I mean, no one is yet to make a case for any reason to record. I do not see any reason in the world to record. The fans who come see you do not care. They claim they care, but they do not really care, because, if you think about it, if you take an average setlist of 15 to 20 songs, those songs are off the albums everybody bought. Now, if you could actually tell the fans, "We are going to play a new song today, but we are going to take this other one out to play it." What do you think they are going to vote for? If I said, "Here is a new song but we are not going to play 'Burn In Hell'; here is a new song, but we are not going to play 'Under The Blade'; Here is a new song, but we are not going to play 'We're Not Gonna Take It'"; that would not go over too well. So the point is, we do not tour. You have nothing to promote and nobody buys it and nobody listens to it, so it is contrary to any logic whatsoever that it matters. Now it only matters if you care that it matters, so if you want to write the stuff because you feel you have a need to express it, then you write it and record it. Dee has not written a song in 20 years. He has no need to express it, and so therefore we do not do it, and we do not play enough for it to matter, since we only play one show in one country every couple of years. It is not like people say, "Wow, man! When is the new tour coming? I saw you on the last tour." We do not get a chance to play that often, so I just think for bands like KISS and JUDAS PRIEST and all these bands who make all these new records that nobody buys… When I say "nobody buys," I mean in their heyday, bands are selling 2 or 3 million copies, and now they are selling 100,000 records, alright? If you are touring, it may make some sense. I just do not see the logic behind it. We are happy playing these 17 songs and we are a great live act and we do them really well. Does anybody care if AC/DC makes a new record? I mean, they have made the same record for the last 30 years. AC/DC is one of my all-time favorite bands, all time, they are one of the only bands I will stand up for two hours to watch, but if I see them, do you think I want to hear a new record? Of course not.

Full Throttle Rock: During the 1980s, you were active in your support against the PMRC and their censorship agenda. Looking back on that, what do you recall and all these years later do you think they achieved their goal?

Jay Jay French: I do not know. I do not think it was worth anything, I thought it was a waste of time from everybody's part. Whether it helped or hurt, it is impossible [to say]. People ask me about this all the time. I really thought that the whole thing was just a political circus and it had no relevance and it had no impact one way or the other. I do not think it changed anything. I mean, if you think about the records they objected to back then, and look at what is out now, and the videos out now, it is such a joke. If you think about the way time evolves, alright, I will give you an example of long term, just how the world changes. Elvis was the most dangerous thing on Earth and he winds up in Vegas, Chuck Berry was like the Devil in a black man and winds up being the theme song for John McCain's campaign, you know, "Johnny B. Goode". I mean, you give it enough time it becomes less dangerous. Our videos and our music and our image at the time, "Oh my God!" How horrible, how shocking! Now it would not raise an eyebrow anywhere. So it kind of like makes the whole thing kind of silly, if you really look at it. The whole thing was a huge waste of time and I do not think it did anything. I think it hurt our reputation only because Dee went up to Congress and said, "I am really a nice guy and I love my wife and I do not do drugs," and I went, "Oh that is a great way to destroy your reputation." [Laughs] You know, tell people that you are straight. We were warned about that because the band was a straight band, we did not drink, we did not do drugs, we were warned by our record label and management, "Do not say that, you will destroy your reputation!" It is the only business in the world where being straight hurts you, which I think is kind of ridiculous, but it is true. We had to keep all that quiet because our reputation was we are crazy, we are nuts and we were, we were really obsessed with making it, but in terms of partying, we never partied ever — ever! People ask me about it all the time and it never happened. Never. It just never did. The band worked too hard. You know, getting high never happened, never drank, never did drugs, we were completely against that, I never hung out with musicians who did that, I mean, I am heavily anti-drugs. I have only had five beers in my life [and] I have never understood alcohol consumption nor did I understand drug consumption when it comes to destroying your ability to be able to perform. If you are a professional entertainer, someone is paying their hard-earned money to see you put on a great show. How dare you not put on a great show? When I hear bands go on late, take their audience for granted, stoned out, I am, like, you call yourself professional? You get no respect from me.