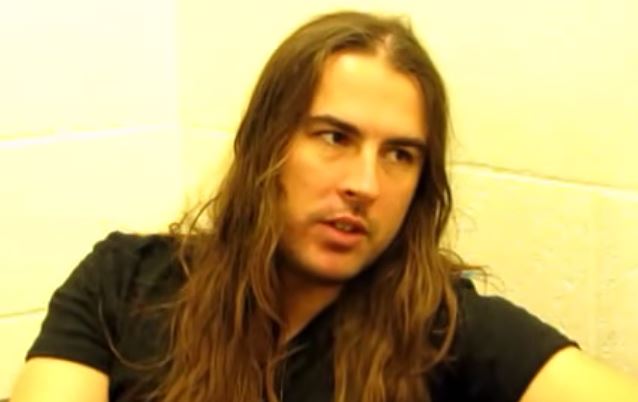 AIRBOURNE's official UK fansite conducted an interview with the band's drummer, Ryan O'Keeffe, on October 31 in Manchester, England. You can now watch the chat below.

Speaking about the progress of the songwriting sessions for the follow-up to AIRBOURNE's third album, "Black Dog Barking", which was released in May 2013 via Roadrunner Records, Ryan said: "We've got a studio set up in the back lounge [of our tour bus]. We're working on stuff for the next [CD]. We just throw little ideas down and stuff like that, and it'll all start coming together once we get home [to Australia]… You just collect stuff, material, and then when you get back home, you sort of tip it all out on the ground and put it together."

Regarding a possible release date for the next AIRBOURNE album, Ryan said: "We wanna have it out the second half of next year, but there are still a lot of things. We've still got it all together. It's one of those things where if we're not happy, we're not gonna release it. But you, know, that's how it goes."

Asked if AIRBOURNE will return to Canada to record the next album with Canadian producer and songwriter Brian Howes, who worked on "Black Dog Barking", Ryan said: "I'd say so. I don't see why not. We worked well on the last one."