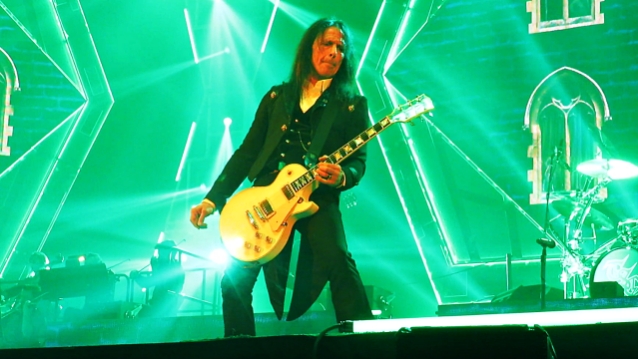 In a recent interview with Guitar World, TRANS-SIBERIAN ORCHESTRA guitarist Al Pitrelli (SAVATAGE, MEGADETH) revealed that the group has started tracking new holiday music at its studio in Tampa, Florida (the facility formerly known as Morrisound) — TSO's first recordings since the 2017 death of producer Paul O'Neill.

"There's a lot of stuff that was not completed that Paul wanted to see come to life," Pitrelli said. "He wanted this to live forever, and it's comforting to know that that's being accomplished now that there's new music being worked on. It just makes my heart smile, because at the end of the day, Paul's wishes are coming true."

Pitrelli also said that TSO's touring schedule — which often sees each of the group's two touring troupes each perform twice a day — isn't as rigorous as it might seem on paper. "This isn't something that I sit around all year long and then just go, 'Oh, I've got to get ready to go to work,'" he said. "Physically, mentally and playing-wise, I'm never out of shape, and I'm never really unprepared. If we're not touring, we're recording. If we're not recording, we're touring. There's always a guitar in my lap."

His comments were echoed by fellow TSO guitarist and SAVATAGE alumnus Chris Caffery. "It's hard to physically prepare yourself," he said. "You can [practice] for five hours, but you don't put the same emotion into it. It's always like that with a metal band when you go on tour — we call it 'gig neck,' when your neck isn't used to that movement. It takes a few days to get into it. That's why I always find that I don't get more tired as the tour goes on — I get stronger, since my muscles adjust and it gets easier."

Caffery also noted that the group's performers exercise self-discipline on days off. "We take care of ourselves a lot differently now," he explained. "In my 20s, we would be hanging out at bars and going to shows on our days off. Now, we don't do anything other than rest. We're aiming a different energy towards this. There's just so many people who come to see this show that you want everybody to see the best thing we can do."

For a list of remaining tour dates, visit trans-siberian.com.