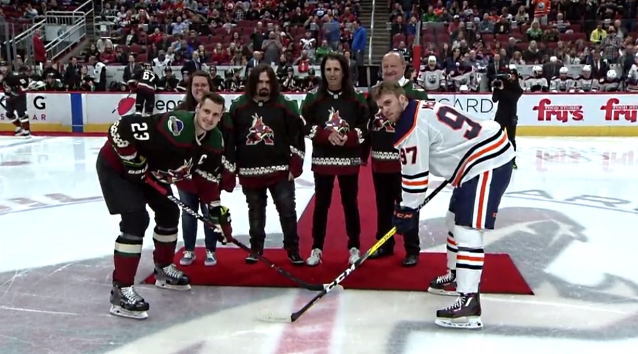 Alice Cooper dropped the ceremonial first puck prior to the Arizona Coyotes' March 16 game against the Edmonton Oilers at the Gila River Arena in Glendale, Arizona.

Cooper was joined by his son, Dash, as he arrived at center ice to the tune of his 1973 classic, "No More Mr. Nice Guy".

Video footage of the puck drop can be seen below.

Cooper, a Phoenix native, is a longtime Arizona Coyotes supporter. Four years ago, Coyotes goalie Mike Smith paid tribute to the rock and roller on his special retro goalie mask. Cooper's face, in his trademark makeup, adorned the backplate on Smith's back.

Cooper told Billboard that he will possibly release a new EP to coincide with his summer tour with HALESTORM. The effort will likely consist of four tracks recorded in Detroit with producer Bob Ezrin and various musicians from the area, including drummer Johnny "Bee" Badanjek. A full-length album could follow in 2020.

Cooper recently announced a handful of July tour dates marking the premiere of his all-new "Ol' Black Eyes Is Back" show, which will have a very different look than recent tours. These dates will precede his summer 2019 month-long co-headline run with HALESTORM.

The premiere of the tour will take place at Foxwoods on July 4 in Mashantucket, Connecticut and run through July 11 in Wabash, Indiana before joining forces with HALESTORM on July 17 in Allentown, Pennsylvania.