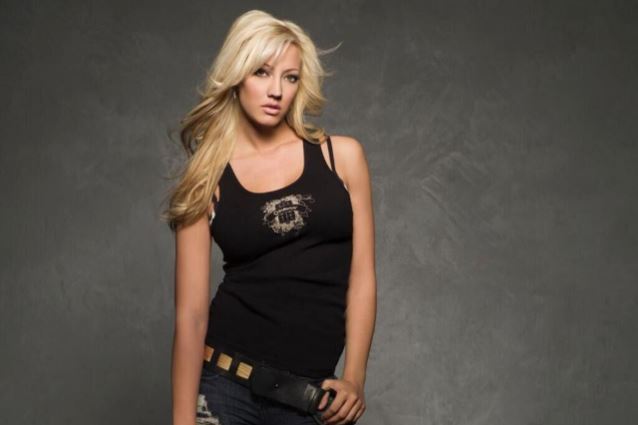 The Women's International Music Network (the WiMN) has announced that Nita Strauss will co-host the 2016 She Rocks Awards. Honoring women who stand out as role models in the music industry, the She Rocks Awards will take place Friday, January 22, 2016, in Anaheim, California during the Winter NAMM Show.

"I'm so excited to be a part of the She Rocks Awards this year, and join Laura Whitmore and the WiMN to honor some of the incredible women in all the different aspects of our industry," said Strauss.

Hosting duties will be shared between Strauss and WiMN founder Laura B. Whitmore.

"Nita Strauss has serious chops and is a role model for guitarists everywhere. When I asked her to join us for the She Rocks Awards, she didn’t hesitate. It will be a pleasure to share the podium with her!" said Whitmore.

Strauss has become a force to be reckoned with in the music world, dazzling audiences across the U.S., U.K., Europe, South America, Asia, Australia and Africa, and sharing the stage with a diverse range of artists including legendary R&B star Jermaine Jackson, early MTV darlings FEMME FATALE, video game supergroup CRITICAL HIT, and popular tribute band THE IRON MAIDENS.

In 2014 Strauss became the official in-house guitarist for the LA KISS, the arena football team owned by Paul Stanley and Gene Simmons of KISS. She is currently playing guitar for ALICE COOPER on the MÖTLEY CRÜE "The Final Tour".

The WiMN recently announced the lineup for the 2016 She Rocks Awards, including the legendary Chaka Khan, trailblazing guitarist Jennifer Batten, and Amy Heidemann of the chart-topping duo KARMIN. Other honorees include Leslie Ann Jones of Skywalker Sound, Chalise Zolezzi of Taylor Guitars; Cathy Carter-Duncan of Seymour Duncan; Mindy Abovitz of Tom Tom Magazine; and many more.

The She Rocks Awards pay tribute to women who display leadership and stand out within the music industry, and has become a standard at the NAMM Show. Previous award recipients include female industry leaders such as Colbie Caillat, Sheila E, THE BANGLES, Orianthi, Dinah Gretsch, Craigie Zildjian, Janie L. Hendrix, and more. The event brings together industry professionals, music icons, artists, fans and media to celebrate women in music.

The She Rocks Awards will take place on Friday, January 22, 2016 at the Anaheim Hilton Hotel at 6:30 p.m. This event has sold out the past three years and a NAMM badge is not required to attend. Tickets are on sale now at www.sherocksawards.com. 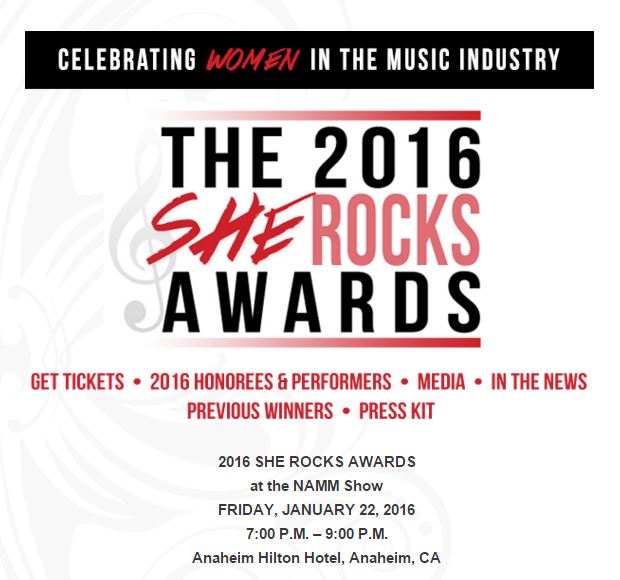