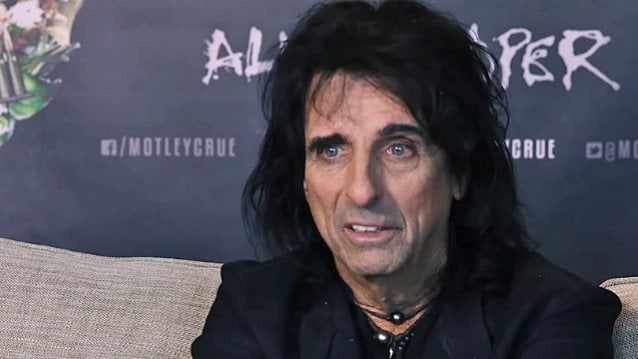 ALICE COOPER On DONALD TRUMP: 'I Know He's Doer, He's Not A Sayer'

Democratic Party presidential frontrunner Hillary Clinton leads her party's primary race with 46 percent of the votes while Trump has 27 percent of primary voters on the Republican side.

During an appearance on the special Halloween episode of "The Strombo Show", the Canadian radio program hosted by award-winning personality George Stroumboulopoulos, Cooper stated about the 2016 U.S. presidential race: "It's so funny to think about Donald Trump and Hilary. It's going to be the funniest election of all time. I mean, think of it. I keep thinking to myself, is this really the best we can do? With all the great minds in America, this is really the best we can do?"

He continued: "The thing I think about Donald Trump and I'm not political at all, but I know Donald and I know he's doer, he's not a sayer, he's a doer. I think that's what the American public are looking at. The American public always votes with their wallets. They're looking at a guy and going, 'Why don't we put a billionaire in there that knows how to run a business? Because America is basically a corporation, and that's what they're thinking right now. They don't want some vanilla politician in there anymore doing business for us that's milk toast. They want a guy that is going to do something. I don't know how much he knows about foreign policy and that's what worries me, and I think [it worries] a lot of people."

"To me, that's treason," he told the Canadian Press at the time. "I call it treason against rock and roll, because rock is the antithesis of politics. Rock should never be in bed with politics.

"If you're listening to a rock star in order to get your information on who to vote for, you're a bigger moron than they are," he said. "Why are we rock stars? Because we're morons. We sleep all day, we play music at night and very rarely do we sit around reading the Washington Journal."

Cooper continued: "Besides, when I read the list of people who are supporting Kerry, if I wasn't already a Bush supporter, I would have immediately switched. Linda Ronstadt? Don Henley? Geez, that's a good reason right there to vote for Bush."

FIVE FINGER DEATH PUNCH guitarist Zoltan Bathory recently became the first Republican-leaning rocker to express his views on the 2016 field. Others, such as STAIND's Aaron Lewis, Kid Rock, GODSMACK's Sully Erna and the members of AVENGED SEVENFOLD have yet to endorse a candidate.