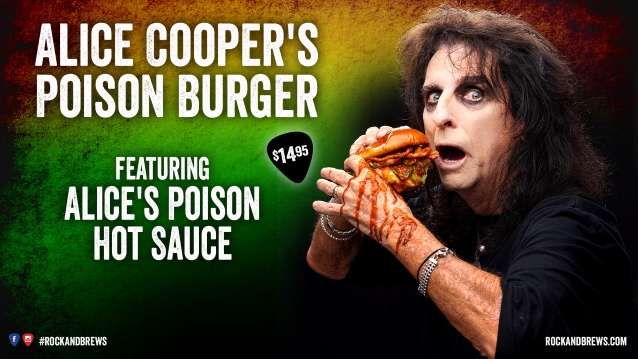 Rock & Brews restaurants have teamed up with Rock And Roll Hall Of Fame legend Alice Cooper in creating an outrageously hot and tasty burger.

The Poison Burger features Cooper's "Poison" Reaper Hot Sauce and jalapenos to give your tastebuds a spicy thrill. The new menu item is available nationwide at Rock & Brews restaurants (excluding airports, arenas, and casinos),who are throwing down the gauntlet, asking fans to come and take the #PoisonChallenge, finish the burger, and prove they are worthy by sharing their photos on their favorite social media outlets.

With Alice currently on tour September 17 through October 23, he might be seen at a Rock & Brews location having a Poison Burger himself.

"I DARE you to finish a Poison Burger. It's a great cheeseburger, and it's MY hot sauce on it and I could barely get through half of it before reaching for the antidote," explains Alice. "Unlike my guillotine, the Poison Burger doesn't pose any mortal danger, but it is NOT for the faint of heart. If this cheeseburger were around Salem in the 1600s, they would have burned the chefs as witches!"

In collaboration with Primary Wave Music and Hot Shots Distributing, Alice Cooper's Hot Sauce line features three different hot sauces based on his hit songs, "Welcome To My Nightmare", "No More Mr. Nice Guy" and "Poison". The intense heat of the "Poison" Reaper Hot Sauce will put you in Alice's straitjacket. Your senses will tell you to stop when you feel the Reaper chiles running through your veins with... Poison! All three hot sauces are now available at participating Rock & Brews locations and online globally at Amazon.com and UnitedSauces.com.

Rock & Brews is a one-of-a-kind, rock-inspired restaurant and entertainment concept designed to engage people of all ages with quality handcrafted American food and local favorites, a second-to-none selection of craft and international beers. Founded by rock icons Gene Simmons and Paul Stanley of KISS, along with partners, restaurateur Michael Zislis and concert industry veterans Dave and Dell Furano, the first Rock & Brews opened near LAX airport in Southern California in 2010. Each of the brand's 20 locations in the United States and Mexico boasts a backstage environment showcasing iconic rock art, concert trusses and lighting, and multiple flat screens sharing some of the greatest rock concert moments of all time.