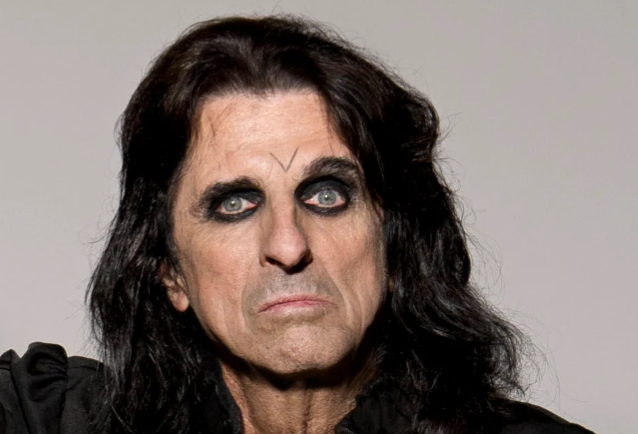 ALICE COOPER Looks Back On METALLICA's GRAMMY Loss To JETHRO TULL: I Thought They Handed Me The Wrong Envelope

METALLICA was nominated for the very first "Hard Rock/Metal Performance" Grammy in 1989, but famously lost to JETHRO TULL, a band distinguished mainly by its heavy use of flute. Fans — and even some audience members — were rightly outraged, though TULL's record label tried to make light of the faux pas by placing a Billboard ad that read, "The flute is a heavy, metal instrument."

Award presenter Alice Cooper, who — along with Lita Ford — announced TULL's win, recalled the experience in a new interview with Meltdown of Detroit's WRIF radio station. He said (hear audio below): "Well, first of all, when we did the rehearsal, you opened up the thing and they just said, 'Name any band' — you were just practicing naming the band. And it was METALLICA and all these great heavy metal bands, and JETHRO TULL, who's so far away from metal. And I opened up the thing and I went, 'And the winner is JETHRO TULL.' And everybody laughed. And I looked around. I was looking for somebody to say, 'Did you hand me the wrong envelope?' I thought they handed me the rehearsal envelope. And they said, 'No.' And then I realized what it was. In that day and age, at that time, the people that were voting, the judges, METALLICA was a brand new thing, metal was a brand new thing, and the only band they recognized was JETHRO TULL. And even JETHRO TULL went, 'What?'"

JETHRO TULL did not attend the event, and Cooper ended up accepting the award on the band's behalf. "I said, 'I'm accept this for [JETHRO TULL], but I think they're gonna probably send it back,'" Alice told WRIF.

When METALLICA's "Black" album won another "Best Metal Performance" Grammy in 1992, drummer Lars Ulrich "thanked" JETHRO TULL for not releasing an album in that year.

In a 2012 interview with Powerline, JETHRO TULL vocalist Ian Anderson recounted that historic day when his band was given the award for best hard rock/metal performer.

"I probably get [the question] a lot more when I'm talking to American writers than I do [at home in England]," Anderson said. "It's not really a big deal over here. It was in a year where it was a new category for 'hard rock' forward slash 'metal' and that category still exists today … and we were, for some strange reason, nominated. And at the time, no one paid any attention to the fact that we were nominated. There was not a peep out of anyone. Because they thought there's no way JETHRO TULL are gonna win it. Nor IGGY POP, nor JANE'S ADDICTION. It's going to be METALLICA because they were the huge, new, straight-out-of-the-box, enormous, hit talent that year and everybody took it for granted that METALLICA were gonna win the Grammy, including METALLICA themselves. And when it was ordered to JETHRO TULL, to a barrage of boos and hisses and gasps of disbelief, I'd like to think that it wasn't that the six thousand voting members of the National Academy Of Recording Arts And Sciences were voting for JETHRO TULL as a heavy rock band or a heavy metal band. They gave us the award because we were a bunch of nice guys who never won a Grammy before. And sad to relate, even after all these years, there is still no category for best one-legged flute player. Otherwise, I'd be winning it every year."

He continued: "And as we said at the time, METALLICA were an exciting new band. and they will be sure to win the Grammy next year and indeed they did. And to prove the point that heavy metal bands do have a sense of humor, they took out a full page ad in Billboard when they won the Grammy, thanking their record producer, their record company, their mums, their dads, their brothers, the family dog and JETHRO TULL for not bringing out a new album that year."

Two years ago, on the 30th anniversary of that fateful day, Ulrich took to his Instagram to reflect on his band's first Grammy loss, writing: "Today 30 years ago, February 22 '89, we played the Grammys for the first time and that was quite a mindfuck!! First time we were in front of a mainstream TV audience. First time mainstream America was exposed to whatever the hell it is we do. First time they had a hard rock/metal category on the Grammys. First time we were Grammy losers, since JETHRO TULL, somewhat unexpectedly to most people, walked away with the win.

"But all was not lost. The expressions of disgust from most members of the audience (other than Iggy!) is something I will treasure for the rest of my life. And I was rocking some pretty crazy hair that was edging dangerously close to a mullet! Happy days indeed!!"