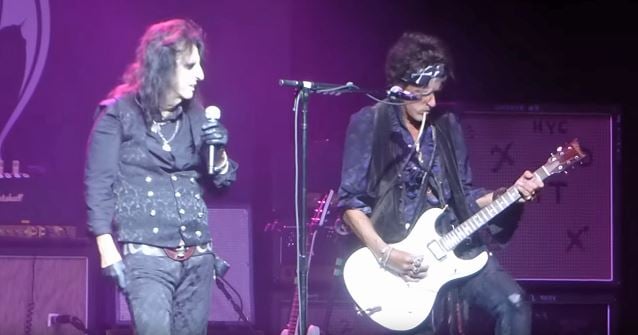 Alice Cooper has commented on his HOLLYWOOD VAMPIRES bandmate Joe Perry's recent backstage collapse, saying that the guitarist "was not ready" for the rigors of the band's busy and physically demanding touring schedule.

"It scared the hell out of me," Cooper tells Rolling Stone about the July 10 incident in Brooklyn, New York. "The lyrics to ['Raise The Dead'], the first song we played that night, go, 'Cardiac, heart attack … they never feared the reaper,' and I look around the stage and he's gone. He was lying behind an amp on his back, and I went, 'Oh, my God.' We didn't know what happened until after the show."

It was later reported by Premiere Networks that a combination of dehydration and exhaustion caused the AEROSMITH guitarist to collapse, resulting in a trip to the hospital.

"AEROSMITH does two shows a week, but we were on our eighth show in nine days, and I'm used to working like that," Cooper says. "I'm used to working an hour and 40 minutes or two hours, five nights a week. I was in shape and so was Johnny [Depp, HOLLYWOOD VAMPIRES guitarist] and everybody else. I think Joe was not ready for that kind of pace."

Perry rejoined HOLLYWOOD VAMPIRES on the road on July 22 in Rohnert Park, California.

The VAMPIRES — which also include ex-GUNS N' ROSES drummer Matt Sorum and STONE TEMPLE PILOTS bassist Robert DeLeo — wrapped up their tour on July 25 at the California Mid-State Fair.

AEROSMITH singer Steven Tyler, who recently released his debut solo album, said that he was extremely worried about Perry, telling The Pulse Of Radio it's very likely that the VAMPIRES' itinerary is simply too strenuous to allow Perry the time needed to recharge between gigs.