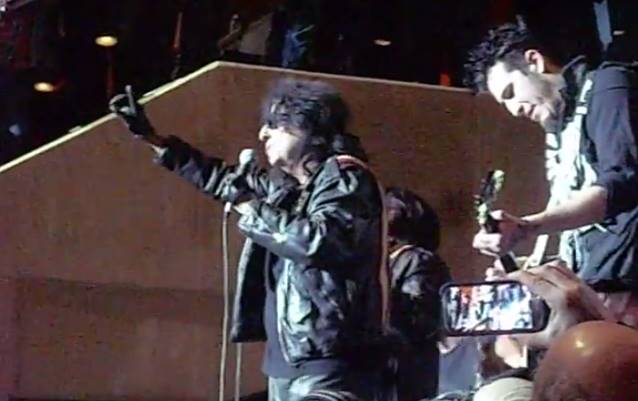 Legendary rocker Alice Cooper appeared on a small stage in the stands during the second intermission of the Blackhawks' 2-0 loss to the Coyotes on February 7 at Jobing.Com Arena in Glendale, Arizona. According to the San Antonio Metal Music Examiner, Cooper — backed by a full band — put on a 15-minute mini-concert, opening with "I'm Eighteen" before segueing into "No More Mr. Nice Guy" and "School's Out", which was given a PINK FLOYD touch halfway through.

Video footage footage of the performance — courtesy of Jay Nanda of the San Antonio Metal Music Examiner — can be seen below.

Cooper will be the special guest opening act on MÖTLEY CRÜE's "final" tour, which kicks off with a North American leg that's scheduled to run from early July to late November.

Alice's much-anticipated covers album, featuring songs that were originally written and recorded by THE DOORS, Jimi Hendrix, John Lennon and THE WHO, members of the so-called "Hollywood vampires" of the early and mid-'70s, will be released this spring prior to the CRÜE tour.

Kicking off in early March, Cooper will headline the month-long "Rock Meets Classic" tour, which makes stops in 17 German cities, as well as venues in Switzerland, Austria and France. Alice also will play a handful of European shows in late May and early June, including a June 4 appearance with AEROSMITH in Norway and a June 5 performance at the Sweden Rock Festival.