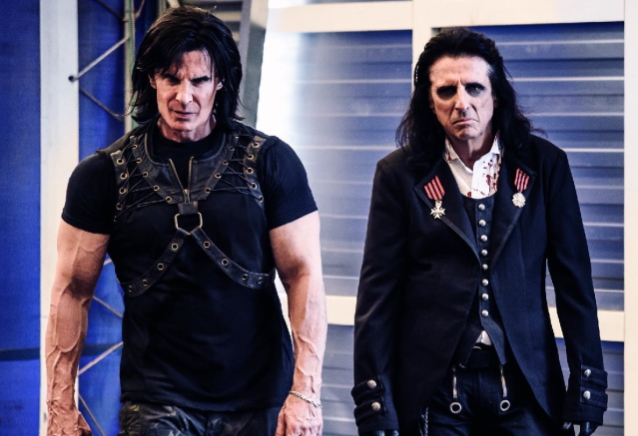 Alice Cooper will be rejoined by guitarist Kane Roberts for the legendary rocker's tour in the fall. Kane's return to Alice's touring band was first reported as a rumor by the Metal Sludge web site on Monday (July 11).

Alice announced his renewed collaboration with Kane in a social media post earlier today. He wrote: "I'm looking forward to welcoming back Kane Roberts for our shows in September and October. We've been friends all this time, and he's always been one of my favorite guitarists. He's bringing more muscle to the 'Detroit Muscle' tour.

"We've always had a swinging door policy where players can come and go, so it's very exciting to get back on stage with Kane. The fans are in for a real treat at these shows. It's gonna be a blast. Kane Roberts, Ryan Roxie, and Tommy Henriksen on guitars? Hell yeah!"

Earlier this week, Nita Strauss announced her departure from Cooper's band after an eight-year stint. The guitarist also canceled all of her solo festival appearances for the rest of the year.

Kane has recorded a total of five solo albums (among them the PHOENIX DOWN project released in the late '90s),including his latest, "The New Normal", which arrived in January 2019 via Frontiers Music Srl. "The New Normal" contained the song "Beginning Of The End", featuring a guest appearance by Alice.

Kane's name and abilities first came to prominence on Cooper's "Constrictor" album, which was soon followed by his self-titled debut solo album in 1987. More albums and tours with Alice followed, making Kane a well-known face in the business especially for his guitar skills, but also for his body-builder image and his now iconic machine-gun guitar.