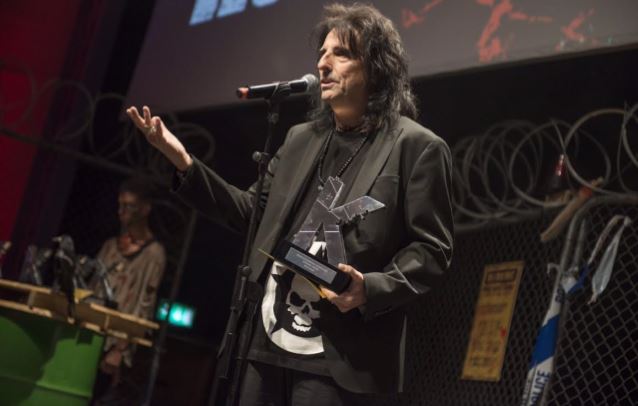 United Stations Radio Networks, Inc., an independent leader in the creation and marketing of network radio programming, has announced that its long-running network radio show "Nights With Alice Cooper" was named "Best Radio Show" at the Relentless Kerrang! Awards in London last week. For Alice Cooper it was the second award of the night — he also walked away with a "Legend" award at the annual event hosted by the legendary magazine.

Alice Cooper said: "We joke all the time on the air that we're award-winning and the No. 1 radio show in mental institutions or prisons for instance, but this time we really did win at the Kerrang! Awards, for my show on Planet Rock and it's real!

"I never get tired of doing 'Nights With Alice Cooper', playing great music and saying what's on my mind.

"I think people like to hear the backstage stories… the 'back-in-the-day'" stories, and now, when I'm on tour, the one-on-one inside scoop from the road.

"As a kid, DJs were the coolest guys in the world.

"Thank you Kerrang! and Planet Rock in London. We work hard and we have fun, so thanks a lot! Good on ya, mates!"

"Nights With Alice Cooper" producer Katherine Turman adds: "Alice is the easiest, most creative guy to work with, so I'm very excited that translates so well to the airwaves.

"I'm honored that the show's been recognized for all the time and energy Alice and our staff put into it. It's great that 'Nights With Alice Cooper' is such an integral part of the amazing lineup on Planet Rock, which also includes Joe Elliott and Rick Wakeman."

Planet Rock broadcasts across the U.K. on digital radio, digital TV, online and via its mobile app. Planet Rock plays guitar-driven melodic rock music, from the '70s through to today, from LED ZEPPELIN, PINK FLOYD, FOO FIGHTERS, AC/DC to ROYAL BLOOD, BLACK STONE CHERRY and MUSE. The station celebrates genres of rock music from classic, new rock, metal, blues and prog. They all live in one place; they live at Planet Rock — "Where Rock Lives." With 1.25 million listeners, Planet Rock is not only home to shows from Alice Cooper and DEF LEPPARD's Joe Elliott, but it is also the biggest rock-only station in Europe.