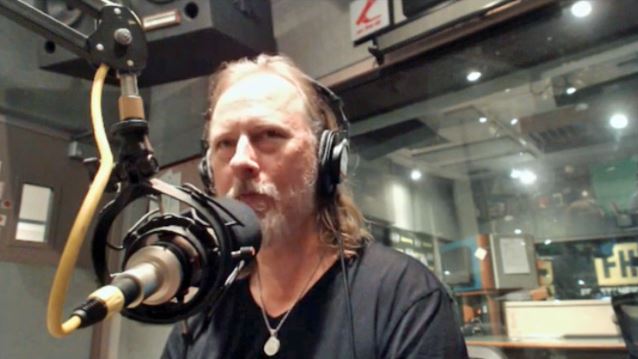 ALICE IN CHAINS Guitarist: Carrying On After LAYNE STALEY's Death Was 'Hardest Thing We Have Ever Done'

During an October 4 appearance on SEX PISTOLS guitarist Steve Jones's radio show, "Jonesy's Jukebox", ALICE IN CHAINS guitarist Jerry Cantrell spoke about the difficulty of resurrecting the band after the death of the group's original frontman Layne Staley in 2002. He said: "Well, we as a band were dead as well as our friend, you know, so there wasn't anything, and there wasn't any intention of doing anything. So, yeah, that's probably the hardest thing that I, or we as a band, have ever done, because it took an incredible amount of effort to restart, to take a chance to make new music, to invite a new member in — a singer — which probably were gonna compare, even though they're two complete different guys and two complete different sounds, with William [Duvall, current ALICE IN CHAINS singer] coming in. But we did it, and we've been going for ten, eleven years now. [We've made] two records and [done] a ton of tours, and we've had a lot of success. And most of our fans have come along with us."

He continued: "In the age of the online troll, there's always the small contingent, the vocal contingent that is… well, they just don't like anything, and they get off being jerks. And we had a little of that, like anybody has, but mostly… I mean, what are you gonna do? Your bro died. And it's your music, it's your band. We wanted to continue. And what was most important for us is that it felt right to us, and it did every step that we took. And we didn't plan on doing anything more than, 'Hey, let's just do a show.' 'Hey, let's do a couple of shows.' 'Hey, wait a minute! That was kind of cool. Let's do a tour.' 'Now we're coming up with some tunes. Maybe let's try to record those.' We didn't even have a record deal — none of that — we just did that all on our own. And we recorded that record on our dime and then went to the record company with it in hand. Like, 'Here it is.' Number one single, 'Check My Brain'. There you go."

Cantrell added: "So it's been cool. It's been difficult at times, but it's worth all the hard work. And it's worth continuing on, not only honoring Layne, but honoring ourselves as well. And, on top of that, all the people that show up every time we show up, man. We're honoring them, too, for supporting us and for having the music matter to them."

ALICE IN CHAINS, who opened the first five shows on GUNS N' ROSES' summer North American stadium tour, is now on a headlining trek that brings the group to Los Angeles on Tuesday (October 4).

Duvall told the WRIF radio station in June that it was "too early" to talk about the band's new music, despite the fact that it's been more than three years since the release of their last studio album.

"The Devil Put Dinosaurs Here" came out in 2013 was the band's second disc with DuVall, who joined in 2006 following the death of Staley.