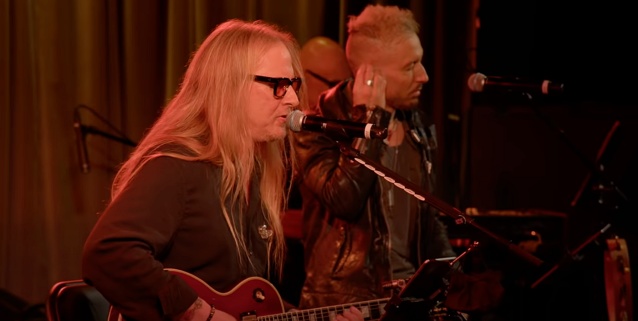 ALICE IN CHAINS guitarist/vocalist Jerry Cantrell has shared a performance video of the title track of his recently released solo album "Brighten". The clip was directed by Sebastien Paquet and Kevin Garcia and was recorded in November 2021 at the Grammy Museum in Los Angeles as part of the "Brighten" record-release event. It is now available to stream and download everywhere you listen to music. Many of the musicians featured on the record performed with Jerry, including Tyler Bates ("300", "John Wick"),Greg Puciato (THE DILLINGER ESCAPE PLAN),Gil Sharone (THE DILLINGER ESCAPE PLAN),George Adrian, Vincent Jones and Michael Rozon.

Jerry has also announced a U.S. tour that will bring him to cities such as New York, LA, Chicago, Boston, Nashville and Vegas, among many other cities.

A couple of years ago, Cantrell played a pair of sold-out solo shows in Los Angeles joined by an eclectic group of musicians and friends, several of whom appear on "Brighten".

"It was fun to play tunes I hadn't performed in years from 'Boggy Depot' and 'Degradation Trip'," Jerry said. "Tyler Bates not only introduced me to a lot of cool players, he also helped me put the band together for the shows, and performed with me."

"Brighten" spawned from those gigs.

"It was like an old-school '70s record where a multitude of musicians played," smiled Cantrell. "So it's not a set band. I got to make music with a bunch of people I never had before, along with friends like Duff, Tyler and Gil who I've worked with previously."