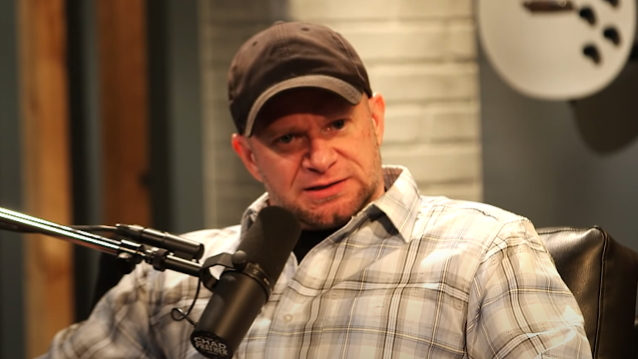 ALL THAT REMAINS Singer Warns Of 'Authoritarian Takeover Of U.S. Government', Says Calling Capitol Riot An 'Insurrection' Is 'Ridiculous'

During an appearance on the latest episode of "The Chad Prather Show", which airs through conservative media group Blaze Media, ALL THAT REMAINS singer Phil Labonte was asked for his opinion on the state of the world at the moment. He responded (as transcribed by BLABBERMOUTH.NET): "There's an attempt for an authoritarian takeover of the United States government in a way that is unprecedented in American history. And the worst part is the people that do want to fight it, they have to deal with — essentially, it's just the most slanderous attacks. If you say 'I'm for this', someone will always say, 'Oh, you just want to do this hurtful thing to this person or these people,' or whatever."

Labonte, who has previously described himself as "a libertarian," went on to single out the trend by liberals and Democrats in referring to Republicans and conservatives in a typically derogatory way, saying: "Get used to the name calling, because it's not about whether or not it's true; it's about if they can convince other people that you're this bad thing. And that's what they did with [former U.S. president] Donald Trump. Now, Donald Trump gave them a whole lot material to work with, but someone like [Florida governor] Ron DeSantis, who, I'm not super familiar with his history, but I assume a JAG officer doesn't have those kind of skeletons in his closet. I assume there's no Stormy Daniels looking to hit up Ron DeSantis," he added, referencing the porn star who alleged she had an affair with Trump while his wife Melania was pregnant.

"And it goes back as far as I can think," he continued. "I remember, and I don't wanna sound like I'm criticizing this man because I'm a huge fan of him, but I remember in the '90s, Kirk Hammett, the guitar player from METALLICA, on the DVD or video [documentary] that they put out, 'A Year And A Half In The Life Of Metallica', he called [right-wing firebrand] Pat Buchanan a Nazi. And back then I didn't think anything of it. But then now, to think back, it's, like, this narrative of conservatives being Nazis or being the most detestable thing that you can comp with, it's not new; it's been going on forever and ever and ever, and I think that it's a bad thing."

Labonte also touched upon the mob violence that happened on Capitol Hill on January 6, 2021, incited in large part by the false voter fraud claims of then-President Trump and his Republican allies, claiming that the destructive event has been improperly labeled.

"The idea that it was an insurrection is probably one of the most ridiculous ideas that I've ever been presented with," Phil said. "On January 6th, I was watching it on the Internet, and I was just, like, 'Man…' There have been bombs that have gone off in the Capitol; that's actually happened in the '80s. So the idea that this was some kind of dramatic thing... The politicians did exactly what they intended to do in the same room on the same day. It was not an insurrection. That's not how insurrections end up." (As a legal term, an insurrection means, essentially, to incite, assist in or engage in a full-on rebellion against the government: a step beyond just conspiring against it, and requiring that significant violence be involved.)

Earlier this year, Labonte condemned the shutdown of Trump's social media accounts by Twitter, Facebook, and other platforms, claiming he was railing against "censorship" and the precedent that banning the then-president of the United States from social media may set moving forward. Labonte went so far as to pen a letter to his governor, saying that while he was "not a supporter of President Trump" and he "did not vote for [Trump], this looming threat of censorship is far bigger than one president's Twitter account. I believe, and fear, that the violence that occurred in Washington D.C. on January 6th is only a taste of what is likely to come in our country. The suppression of opinions deemed unacceptable and the efforts to censor are indicative of, whoa seem me to be, irreconcilable differences — and I worry that it could further add fuel to the fire."

Last year, Labonte confirmed to the FM99 WNOR radio station that ALL THAT REMAINS had commenced the songwriting process for the follow-up to 2018's "Victim Of The New Disease" album.

"Victim Of The New Disease" was ALL THAT REMAINS' final album to feature guitarist Oli Herbert, who was found dead in October 2018 at the edge of the pond on his Stafford Springs, Connecticut property. He has since been replaced by Jason Richardson, who has previously played with BORN OF OSIRIS and CHELSEA GRIN.

Everything I said is exactly right and the truth. https://t.co/GIPjwuUCsF