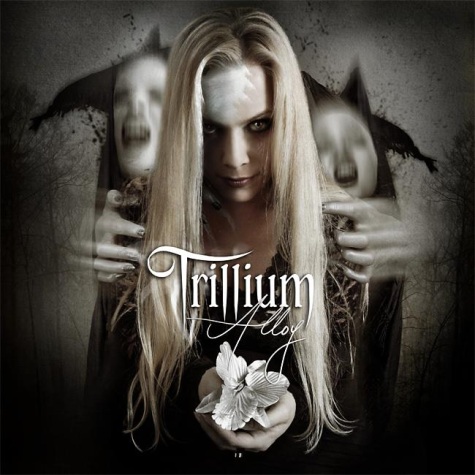 On December 14, 2011, Jason Saulnier of the MusicLegends.ca web site conducted an interview with American singer/songwriter Amanda Somerville . You can now listen to the chat in the YouTube clip below.

"Alloy" is a collection of songs that's charged with emotion and exploration and a very personal statement from Amanda.

"Since I'm an eclectic and diverse person and musician, that certainly comes out in this album," the singer states in a press release. "I think that the diversity is what is going to set this album apart from other stuff that's out there right now. It's got big choruses and epic symphonic hits, guitar solos you could imagine being played on a mountain top with an aerial camera view, but it's also got a lot of soul added to the raise-your-fists-in-the-air-and-make-a-mean-face vibe".

Musically, TRILLIUM melts rock and metal in a new, interesting and different way from anything Amanda has worked on so far. "Alloy" is also graced with the talents of several musicians with whom Amanda had the honor of working in the past. Sander Gommans (AFTER FOREVER, HDK) and Sascha Paeth (KAMELOT, AVANTASIA, EPICA, AFTER FOREVER) were the main songwriters along with the American singer on this album. They have brought a lot to the project and have certainly allowed the sound to be a lot richer and stronger.

"Sander is all around an awesome songwriter and guitar player, and he's especially good at coming up with riffs and movements of a song, while Sascha is a fantastic producer who can play any instrument there is — and play the hell out of it — and his sense of songwriting is really strong!" says Amanda.

Other contributing musicians include Miro Rodenberg, who handled all of the orchestral and keyboard arrangements, Robert Hunecke on drums, Olaf Reitmeier on acoustic guitar, Simon Oberender on keyboards (and mastering). But there are more surprises are on the record.

"Working with Mat Sinner on KISKE-SOMERVILLE established a solid professional relationship and I also found a good friend in him," says Amanda. "We co-wrote 'Love Is An Illusion' together for this album and it was a pleasure working with him once again!"

And last, but in no way least, Jorn Lande has lent his epic voice to the song "Scream It". Somerville tells the story: "I actually wrote that song with Jorn in mind not for his status in the scene, but because I absolutely love his voice, he's a wonderful friend of mine through working together on AVANTASIA and he was the perfect 'actor' to play the character in the song. And he nailed it!"

"Alloy" was released in a lavish digipack CD edition and includes the following songs: