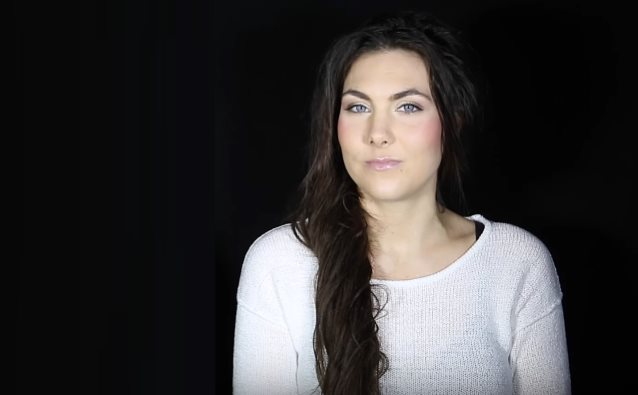 AMARANTHE singer Elize Ryd has revealed that one of the catalysts for the band's birth was the passing of her half-brother.

Johan Carlzon, who fronted the Swedish bands RELEVANT FEW and ABANDON, died on December 17, 2008 in Barcelona, Spain from a reported overdose. He was 32 years old.

Asked by Justine of Psycho Babble TV how AMARANTHE's unique pop-metal sound was first conceived, Elize said (see video below): "Well, [the members of AMARANTHE] have, obviously, very different backgrounds. My brother was, actually, a harsh [singer], a growler, and he had plenty of bands. He was actually in a band called ABANDON, which was very underground and very respected in the Gothenburg scene. And, unfortunately, he ended up in a depression and drugs, so he died in an overdose right at the time when I met Olof [Mörck, AMARANTHE guitarist] and Jake [Joacim Lundberg, former AMARANTHE singer]. That is a big part why I sort of felt like I wanted to be the one in the family to carry on this kind of music, even though I'm not a typical [metal singer]."

She continued: "I always tried to be… I mean, I was always the positive one in my family. Because when people around you are very sad, it makes you, like, instead of… I don't know, but somehow I felt encouraged to be the opposite and to see things from a positive perspective. And that also happened, of course, when he passed away. Not a lot of people probably know that, but it's one of the biggest reasons why I felt so much… why the band was so important for me. And to make him proud, I thought that this was one of the things that I could do. And also to keep him [alive] with me."

Elize added: "Obviously, I couldn't sound like the typical metal girl or guy, or whatever, but I still was part of the songwriting, and I put my vocals on it. And I was very honest with the things that I wrote, and they meant so much to me. Then later on, we got a record deal and people started to talk about how I sounded and stuff, and I was, like, 'But that's not… The whole thing was not like…' I mean, I wanted to do this, but I didn't think it would be so unique. And, of course, people could still be, like, 'Okay, this is shit. Nobody will listen to it.' But still we will have gotten something out of it, writing music, because [it's like a] healing process or whatever. So it's still very… The band is a very nice… I mean, it's my life, it's my baby, it's one of the things that saved me from being miserable, thanks to all the fans and all the positive things that happened. That's what I mean [when I say] it's addictive to me. I need that. I need it. [Laughs]"