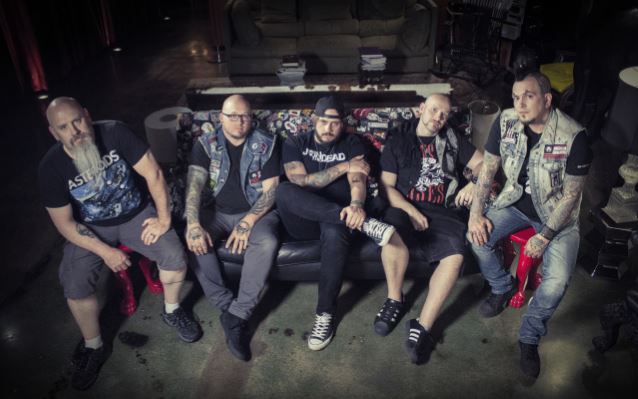 AMERICAN BOMBSHELL, a pure unadulterated hard rock band from Indiana and winner of the 2016 Grammy Amplifier program, in partnership with Hyundai, was chosen from 4,000 entrants. The group was awarded the studio session prize and the opportunity to record a single with a Grammy-affiliated producer.

The winning session resulted in "My Drug", a song recorded with legendary producer Mike Clink at East West Studios in Los Angeles. You can now listen to the track below via Soundcloud.

AMERICAN BOMBSHELL vocalist Jay Cee recently spoke with writer David E. Gehlke about the experience, and in particular on working work Mike Clink. "[Mike] has a great demeanor that puts you at ease," he said. "He wants to push you the get the best out of you, so you know it's going to be a great product. You just sit back and let him do the driving. It was a great experience."

Added guitarist Andy Nixon: "Not only did we get to work with Mike Clink, who I'm sure most of the people who follow BLABBERMOUTH.NET know that he produced some of the better records like [MEGADETH's] 'Rust In Peace' and [GUNS N' ROSES'] 'Appetite For Destruction'.

"We definitely fanboyed out a little and asked [Mike] about some GUNS N' ROSES stories. He had some interesting things to say [laughs]."

Asked about lessons learnt from the winning experience, vocalist Jay Cee elaborated: "From a professional standpoint, just knowing we can go into a top-notch studio with a top-of-the-line producer and hold our own, was huge for us. Who gets that opportunity?!"

The Recording Academy and Hyundai launched the fourth annual Grammy Amplifier program last November when program hopefuls were asked to upload their song on the Grammy Amplifier web site and drive fans to listen and "amplify" their track. A group of ten finalists were selected and submitted to the Grammy Amplifier curators — including HALESTORM frontwoman Lzzy Hale, Big Sean and Sam Hunt — who then chose the winners. All the finalists were also given the opportunity to fly to Los Angeles where they participated in a Music Business Immersion Day with the goal of educating them on social media promotion, copyrights, and publishing, among other topics.