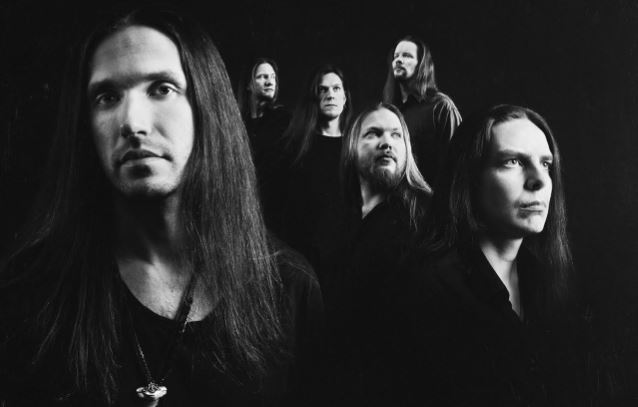 Finnish metallers AMORAL will play their farewell show tonight (Thursday, January 5) at Tavastia in Helsinki, Finland. Guitarist Ben Varonstated about the band's choice to call it quits: "Honestly speaking, I had no idea that AMORAL will disband after [2016's] 'In Sequence' while writing, recording or mixing the album. The decision was made only after the album was done, when it became clear that proper touring would be almost impossible because of everyone's schedules etc. But I've gotta say that I find it very intriguing that an album that talks about synchronicity has all these elements that make it a perfect last album, without anyone planning it like that. I mean, starting with getting Niko [Kalliojärvi] back in the band, then asking Silver [Ots] to play on it as well. And having the final song on our last album be called 'From The Beginning', the longest, biggest song we've ever done, getting bigger and bigger towards the end, with the solos, choir, orchestra... with literally nowhere left to go from there. It all seems so 'coming full circle' to me, it's spooky. Looking back at it, it's almost like I subconsciously knew. And besides, seven is the perfect number of albums to be in a discography. A much more pleasing figure than six or eight."

Asked to elaborate on AMORAL's reasons for disbanding, Ben said: "Like I said, the thing that made me stop and start thinking if this whole thing even makes sense anymore or not was the fact that touring was becoming harder and harder to arrange. Ari [Koivunen, vocals] told us that he was going to be held up for most of the year with his theater works, and Juffi [Juhana Karlsson, drums] also made it clear that multiple, long tours were going to be a problem for him in the future. And I really didn't want us to become one of those bands that have tons of fill-ins in the lineup, different musicians for every tour. I believe a band should be a band, and that the audience wants to see the same lineup that they hear on the record. Meanwhile, I wanted to keep touring like before, if not more so. It made no sense to me to spend a year on writing, recording and putting all this energy on an album if we're not gonna tour heavily on it, bring the music to the people all around the world and promote the hell out of it. So that's how the idea started to sneek into my head, that maybe AMORAL has ran its course, and that it was time to start something new."

"In Sequence" was released in February 2016 through Imperial Cassette (Gordeon Music, GSA). The cover artwork for the follow-up to "Fallen Leaves & Dead Sparrows" was designed by Aki Siltala, who is also one of the most well-known tattoo artists in Finland.