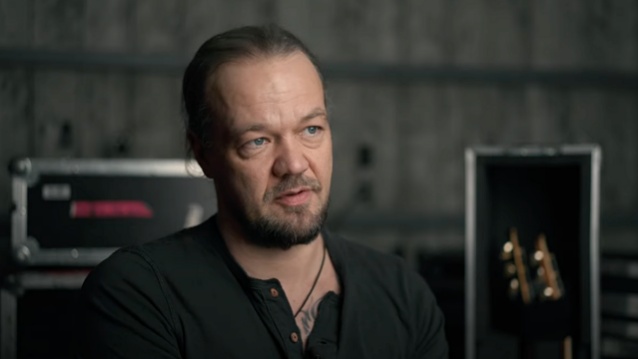 AMORPHIS Guitarist: Russia's Invasion Of Ukraine Is 'One Madman's Work'

In a new interview with Elliott Fullam of Little Punk People, guitarist and founding member Tomi Koivusaari of Finnish melancholic progressive metallers AMORPHIS was asked for opinion on Russia's invasion of Ukraine, He responded: "This madness, it's totally, totally a madman's work, this thing. And I feel bad for Ukraine, of course, and I feel bad for those Russians who don't support this. I feel like it's one madman's work. And, of course, as a Finnish [citizen], we have a long border with Russia and we have a history with Russia. So, of course, this makes me, like, worried, of course, like, what's happening in the future and if the whole world would go mad someday or something. So it feels like that. But I hope this ends, like, very soon, because… I cannot even find the words to describe [what is going on]. But it's a depressing thing."

On Friday (March 11),Finland's president Sauli Niinisto urged Putin during an hour-long telephone call to establish an immediate ceasefire in Ukraine and to allow the evacuation of civilians via humanitarian corridors.

Earlier this week, Niinisto said Finland would review its security policy to decide whether to join NATO.

In a poll commissioned by Finnish broadcaster YLE, more than 50% of Finns supported joining the Western military alliance.