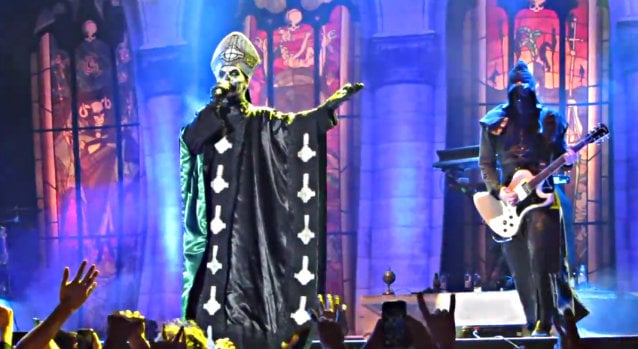 Fan-filmed video footage of GHOST's September 26 concert at the Gröna Lund amusement park in Stockholm, Sweden can be seen below. Photos are available at this location.

Asked if GHOST could one day exist without the outfits and the theatrical stage show, a Nameless Ghoul told Ghost Colombia: "I don't think so. I am very comfortable with the idea of not potentially being anonymous, because, in many ways, we are not anymore. Every show there's 50 people outside our bus and we do informal meet-and-greets all the time, because we have to. We cannot… The laws of gravity… in the sense that we cannot play an enclosed arena where we can completely shy away from everybody, just hovering in a helicopter."

He continued: "We have chosen not to officially claim anything, just because that was never the idea. Whether or not we will do that in the future, we'll see, but I think that what is the most important thing is that we don't change too much of how the actual craft is being presented.

"I wouldn't like to see GHOST as being just a normal band… I mean, on stage, the way that we portray ourselves. Just because people wouldn't know, like, the name of a member or anything like that… It's not like we're gonna start writing out the names on the record. So I think there is a way where these things [GHOST members' identities being known to the public and the bandmembers portraying themselves as 'nameless' on stage] can coexist. But obviously, that's up to fans to decide. If knowing who we are destroys everything, OK."

BEHEMOTH's Adam "Nergal" Darski recently posted a photo on Instagram of him hanging out backstage at the FortaRock festival in The Netherlands with Swedish musician Tobias Forge — believed to be none other than GHOST frontman Papa Emeritus II. The photo was accompanied by the caption "If you have ghosts... U have everything;)", a line from the ROKY ERICKSON song "If You Have Ghosts", which was covered by GHOST on their EP "If You Have Ghost", released in November 2013.

Speaking to Jägermeister at this past summer's Sonisphere festival in the U.K., one of the Nameless Ghouls from GHOST stated about the photo leak: "I mean, it's… We don't really know what to say about that except for we keep our identities as secret as we possibly can, of course, but at some point it's bound to happen, some things that are not really optimal for us, of course. But the identity part is always gonna be, for as long as can take it, it's gonna be a hassle in many ways, and I think we have managed to keep it below the radar, for the most part, at least." 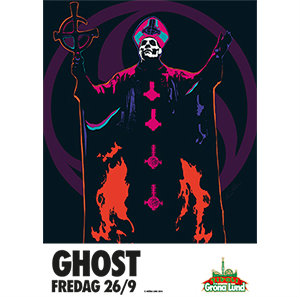