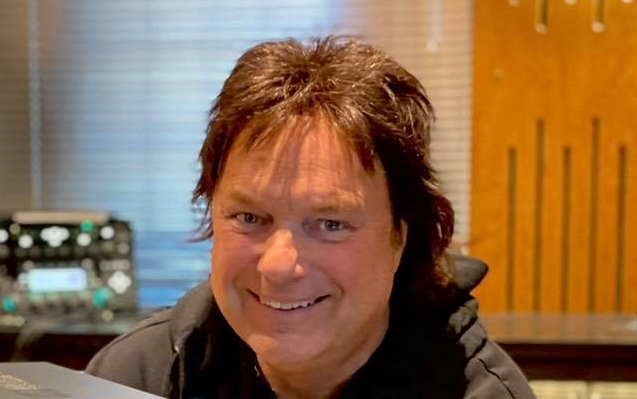 KING DIAMOND guitarist Andy La Rocque spoke to Canada's The Metal Voice about the progress of the songwriting sessions for the band's long-awaited new album, "The Institute". The group's first studio LP in 15 years is tentatively due in 2022 via Metal Blade Records.

"[I have been] working on writing some new material for KING DIAMOND [during the pandemic]," he says (as transcribed by BLABBERMOUTH.NET). "I know it sounds, for people, like, 'Oh, it takes forever.' But yeah, it does. We wanna have the best material when we pick out the good songs and before we start recording, of course. So we're working on that, yes."

Regarding a possible timeline for the release of the new KING DIAMOND LP, Andy said: "Our goal is to go out on the road again when all this COVID stuff is over with. And before that, we need to have an album out there. So, we've got some pressure [on us], yes. King's [Diamond, KING DIAMOND's namesake frontman] got a lot of crazy ideas, of course. He's got the basic lines of the story already in his mind. And I have, actually, four or five songs that could be possible for the next album, and I know he's got tons of riffs and stuff going around in his head too. So, as soon as he sits down and gets it down on tape, it's gonna go fast."

Asked if the COVID-19 pandemic delayed KING DIAMOND's progress on the new material or it made him and his bandmates more productive, Andy said: "It was difficult, because we had a few shows booked at the time it started with the COVID. It came like a shock for all of us, I believe. So [we] got kind of paralyzed in the beginning. And then [we] tried to do the best out of it, and that is just to sit down and write riffs and trying to survive with other things, like producing other bands in the studio… We just tried to adapt to the new situation and [make] new plans, of course, for the future."

Andy, whose real name is Anders Allhage, also discussed his vision for the new KING DIAMOND album, saying that it will be filled with great "melodies, of course. Super important. Without melodies, there is no music," he explained. "I'm also envisioning a more organic sound of the album. If you look back to the older albums, when Mikkey [Dee] played [drums for the band], for example, it's, like, a little bit up and down in tempo, and that makes it dynamic and also organic. So that's one thing that I would like to hear on the next album, for sure. But building up a dynamic, kind of organic feel, the drummer is a really important thing here, of course. And I know that Matt Thompson [current KING DIAMOND drummer] is the right guy to do this, for sure."

Back in November 2019, KING DIAMOND released its first new song in 12 years, "Masquerade Of Madness". A month later, Andy told The Metal Voice that he came up with the music for the track first before passing it off to King, who "needed to arrange a few things and change just a small few things for making it work with his vocals. And then, of course, he wrote the lyrics for it," the guitarist revealed. "So we [went] a little back and forth until he felt like, 'Okay, this is cool, man. This is the right key to sing in,' and all that."

La Rocque told The Metal Voice that the tentative plan is to release "The Institute" as "a single album" as part of a two-LP horror concept story, with the second part arriving at a later date.