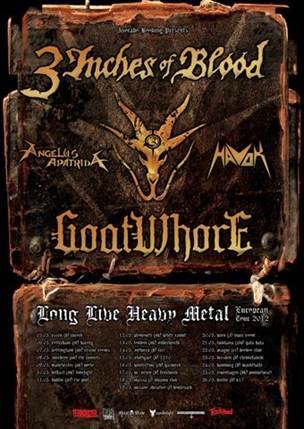 ANGELUS APATRIDA To Release 'The Call' In April

Spanish thrashers ANGELUS APATRIDA will release their new studio album, "The Call", on April 30 via Century Media Records. The CD was once again recorded at Ultrasound Studio in Moita, Portugal with producer Daniel Cardoso (ANNEKE VAN GIERSBERGEN, ANATHEMA). The artwork was handled by Gustavo Sazes of Abstrata (ARCH ENEMY, KRISIUN).

Commented ANGELUS APATRIDA guitarist/vocalist Guillermo Izquierdo: "Our new album is ready and it's damn great! Our only purpose was to put everything we have learned in the last three years into a fistful of songs that could reflect how we feel nowadays. And the result couldn't have turned out any better… it's strong, fast, immediate, sharp, technical and bloody furious!"

ANGELUS APATRIDA will embark on a European tour with 3 INCHES OF BLOOD, GOATWHORE and HAVOK in early May.

According to a press release, "[ANGELUS APATRIDA] was born in the Spanish town of Albacete in the year 2000 and perfectly combines both the aggression and the melodic edge of classic '80s thrash metal with a breathtaking modern southern fury that results in an impressive blend of rage, attitude and a high level of technical skills, rarely seen with young bands like this."

ANGELUS APATRIDA's band name mixes Spanish and Latin language and can be translated into English as "stateless" or "renegade" angels. Influenced by the early Bay Area thrash metal and NWOBHM scenes and more specifically bands like IRON MAIDEN, MEGADETH, ANTHRAX, OVERKILL, PANTERA, TESTAMENT and ANNIHILATOR, ANGELUS APATRIDA established itself in its homeland with two independent album releases, "Evil Unleashed" (2006) and "Give 'Em War" (2007),as well as countless live appearances at various festivals (Lorca Rock, Alternavigo, Metalway, etc.) and at the clubs in most of the country's larger cities with acts like BARÓN ROJO, DESTRUCTION, SEPULTURA and many more.