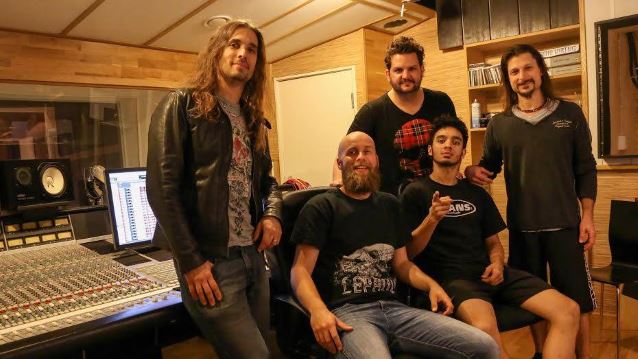 Speaking to TV Rock Live at this past June's Hellfest in Clisson, France, ANGRA guitarist Kiko Loureiro stated about what fans can expect to hear on the forthcoming CD (see video below): "The musical changes always happen because we change as persons as well. So not only the lineup changes. So you can expect some changes, of course, with Fabio, a different voice. We try to search for new ways of doing music, so for sure you guys are gonna hear some different and new stuff, but the core and the essence of ANGRA is gonna be always there anyway."

Regarding the departure of drummer Ricardo Confessori and addition of Valverde, ANGRA bassist Felipe Andreoli said: "Bruno, we've been playing with him, me and Kiko, for the past two and half years, with Kiko's solo trio. So when it was time for Ricardo to go… Ricardo has other objectives in life now, and he wants to be more at home and not on the road so much; he has a family and he has some other stuff that he wants to do. So when it was time for another drummer for ANGRA, we knew that Bruno would be the right choice, because he's a very versatile drummer and we're not a strict power metal band, so we need these elements of other styles and other types of music to be brought into the band. That's very important to keep the band fresh and have new elements and new ideas."

ANGRA celebrated the 20th anniversary of the release of its 1993 debut album, "Angels Cry", with a special concert on August 25, 2013 at HSBC Brasil in São Paulo, Brazil. The performance, which featured special guest appearances by Tarja Turunen (NIGHTWISH) and Uli Jon Roth (SCORPIONS),was professionally filmed and recorded for the "Angels Cry 20th Anniversary Tour" DVD and a double CD, containing over 20 tracks in total and extra behind-the-scenes footage captured during the latest tour.