HEART frontwoman Ann Wilson has released her breathtaking rendition of QUEEN's "Love Of My Life", featuring vocals from Vince Gill. The track is taken from Wilson's forthcoming album, "Fierce Bliss", due out April 29 via Silver Lining Music.

Ann says: "'Love Of My Life' is a beautiful song about endless love. It was my honor to duet with Vince Gill on this song; an unforgettable experience for which I'm grateful."

Wilson has always enjoyed bringing new life and verve to classic songs, and with "Love Of My Life" she has helped fashion a definitive version which stands toe-to-toe with the original.

"I had the idea for the QUEEN song 'Love Of My Life' as a duet, so I just tried to picture who would be 'the male angel' that would sing the other part of it," explains Wilson. "I thought how great the song would be if it was stripped down and just sung with soul, and it had to be Vince Gill because he's got that voice, that soul."

One of the premier hard rock vocalists of all-time, Wilson smashed boundaries with her band HEART, the eight-times platinum, 35-million-plus-selling Rock And Roll Hall Of Fame trailblazers who formed in 1973. During a decades-long career, Wilson rode the roller coaster of fame, fortune and madness, learning both joyous and hard, hard lessons along the way. Fast forward to summer 2020 and a meeting with legendary veteran "artist's lawyer" Brian Rohan provided the catalyst for "Fierce Bliss"'s creation.

Ann says: "Brian recommended people to me that knew people in Nashville, so I met these guys like [famed Nashville session guitarist] Tom Bukovac and Tony Lucido at those Muscle Shoals Sound Studio sessions. I'd never met them before, and they really inspired me. It was like a big door opening."

With the musical chemistry organically established, "Fierce Bliss" came together quickly. "I had originally intended to go in, record a few songs and see what I had, but it just took on this life," remarks Wilson. "At Sound Stage in Nashville, Kenny Wayne Shepherd came in and played on a couple songs. He was a whole other influence coming in. He just played his butt off, and with the gospel singers and everything else coming together, the whole project just started to grow."

Wilson continues: "I'd known Warren Haynes from GOV'T MULE for a while. We'd written a couple songs together with GOV'T MULE playing, and those rounded out the record. So all of a sudden, where there was no record before, suddenly I had eleven cool songs that I really liked."

"Fierce Bliss" is classic rock comfort food of the finest ingredients, carrying a richness and light that allows you to escape into timeless nostalgia. 11 perfectly weighted and selected songs ranging from Wilson's own co-penned originals to breathtaking covers and collaborations. "A Moment In Heaven" could easily apply to anyone who has seen their career suddenly bathed in a bright beam of glory before the spotlight is abruptly moved elsewhere. There is a deeply spiritual air about Ann Wilson 2022, and both "Black Wing" and "Angel's Blues" show different facets of that soul and ethos. Furthermore, Wilson brings new life and verve to classic songs, such as QUEEN's "Love Of My Life", EURYTHMICS' "Missionary Man" and Robin Trower's "Bridge Of Sighs", and has helped fashion definitive versions of each which stand toe-to-toe with the originals.

To cap it all, the album artwork comes from the mind and hands of celebrated fantasy artist Roger Dean, who aside from his work in fantasy art is also renowned for his YES sleeve artwork.

Wilson will soon be hitting the road with her new band, and make no mistake, she's a performer at heart thus her excitement is palpable. Ann Wilson seems to be more comfortable with herself (and her art) than ever before with both "Fierce Bliss" and the band she'll be touring with. "I think that for someone who's been through as much as I have, and has lived to tell the tales, it's okay to share my experiences," says Wilson sagely. "I've heard from a lot of younger musicians and listeners too who have thanked me for staying around and for just keeping upright, just making it through, making the concessions once but not twice, and being able to live through it all with dignity."

This past February, Ann released the first single from "Fierce Bliss", a song called "Greed". At the time, Ann stated about the track: "'Greed' is that thing in our animal nature that makes us want MORE. Whether it be money, sex, power or ecstasy, it fires our craving. It happens with all of us. When you turn around and catch yourself making decisions because you want the money, or because you're caught in the headlights of glory, well, those are greedy moments."

Wilson continued: "I think people who claim to have made every decision from a root of pure idealism, and never done anything dark or greedy, is lying. I think everybody who ventures into especially the music industry hoping for a career with big success, ends up making these Faustian bargains at some point even if only briefly. It's an aggressive song and I think I write best when I'm angry."

* Available on CD and digital formats only

Musicians who appear on "Fierce Bliss": 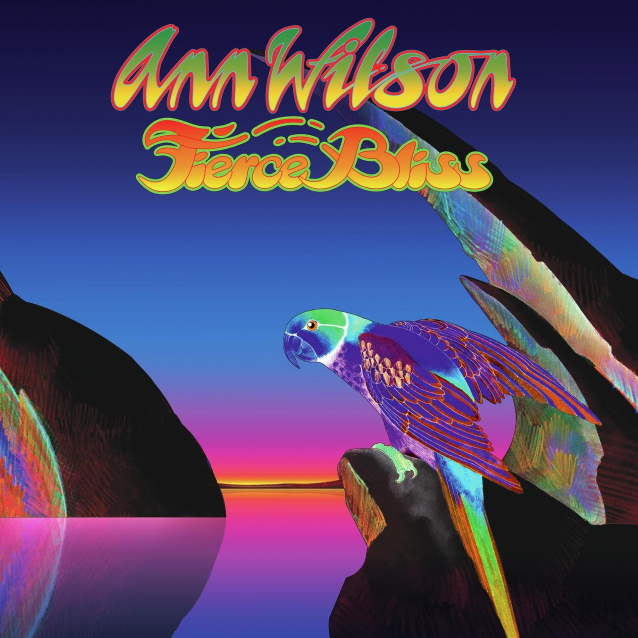