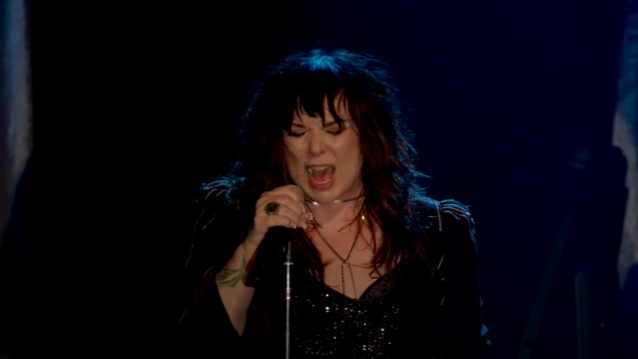 In a new interview with Ultimate Classic Rock, HEART singer Ann Wilson was asked if it's a little bit anxiety-inducing playing shows with her solo band in the midst of this ongoing pandemic situation. She responded: "Yeah, the protocol that we observe now is really intense. The last couple of legs that we went out on, especially the one of the northeast, some of those venues don’t allow you on the premises unless you've tested negative. And some don't allow you on the premises unless you have a vaccination card.

"We had to lay down this thing for our whole tour group," she continued. "Every last crew person, every band person, had to be vaccinated. Some of them just kind of stomped their feet and went, 'Well, that's against my… you know, I'm a free spirit. I don't have to.' And we went, 'Well, you do if you want to be on this tour.' So they all did. But we're still careful. Everyone has to mask up when they're not in their dressing room. So far we haven't had any positive tests and we've been out on three legs now. You've just gotta play it super-careful."

A Fox News poll released last month showed clear majorities of Americans back mask and COVID-19 vaccination mandates. 54 percent of people favor proof of vaccination in indoor spaces like restaurants and gyms while 66 percent said they favor businesses requiring masks for customers and employees. 67 percent said they support mandating that students and teachers wear masks in schools. According to the poll, which included interviews with more than 1,000 registered voters conducted between September 12 and 15, 56 percent of voters supported President Joe Biden's directive to companies with more than 100 employees to require proof of vaccination or regular testing.

COVID-19 vaccines have been studied in humans for more than a year now, and more than 182 million people have been fully vaccinated in the United States alone. There are several robust safety monitoring systems in place for these vaccines that can detect the very rare adverse events.

Two months ago, Wilson and her solo band THE AMAZING DAWGS released a live EP called "Howlen Live". Joining Ann in the group are Tom Bukovac on lead guitar, Tony Lucido on bass, Paul Moak on guitar and keyboards, and Sean Lane on drums.

In April, Ann released another new single, "Black Wing". It is one of several songs the HEART frontwoman recorded last fall in Seattle with the help of local musicians, including current HEART bassist Andy Stoller and keyboardist Dan Walker. In addition to "Black Wing", Wilson recorded "Tender Heart" as well as covers of Steve Earle's "The Revolution Starts Now" and ALICE IN CHAINS' "Rooster", all three of which have already been released as singles, plus another original, "The Hammer", which came out in February.