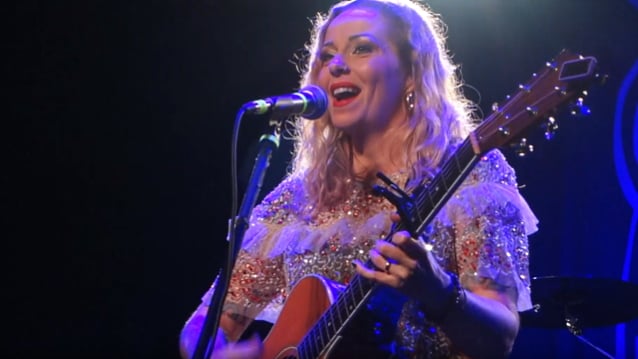 ANNEKE VAN GIERSBERGEN: 'I Look Back On My THE GATHERING Days With A Lot Of Pride'

Alexiel Divine of The Offering webzine conducted an interview with former THE GATHERING and current VUUR frontwoman Anneke Van Giersbergen during a recent stop on her North American tour where she was supporting AMORPHIS and DELAIN. You can watch the entire chat below. A few excerpts follow (transcribed by BLABBERMOUTH.NET).

On doing a full tour in North America after an extended absence:

Anneke: "I love it. I love it. I love touring in general. Of course, some tours are better than others. But this one is really nice. For one thing, I haven't been on a proper tour in North America since my GATHERING days, so that's a long time ago. I did some one-off things, but proper touring is a long time ago. I'm enjoying myself so much. The bands we are touring with, AMORPHIS and DELAIN, are just great. They make great music. So I enjoy their music every day, but also they're great people to work with and to be with. So far we are on show nine, so we are early in the tour and everything is wonderful."

On why she opted to do an all-acoustic set for the tour:

Anneke: "I'm not sure. I think it was the promoter's idea to have the people who set this tour up, it was the idea to have two rock shows and me doing the acoustic show. Also, because I'm doing a lot of acoustic shows by myself all over the place, always. I do these acoustic shows in between band shows and so I do a lot of different things. For some reason, people really enjoy me doing the acoustic thing because I always make a setlist with all kinds of songs, with my own songs, but also my own songs I sang with other people — Devin Townsend, AYREON, you name them. They really like the retrospective thing I do in the setlist playing acoustic."

On whether she would release an album of just acoustic material:

Anneke: "Yes, I am. I actually never made my acoustic album because I've been touring on my own for so long, but I never made this album. I felt now it was time to do that. At the moment, I'm writing and recording a solo acoustic album. I'm writing songs really by myself, on my own I'm writing the songs. Then, eventually, I will work with Gijs Coolen. He's my old guitar player and producer as well. He's getting these ready for production and to be recorded. It's going to be a very personal album. Just he and I are working on these songs. It's going to be a little different than my last album with VUUR. It was a metal album. It's very personal. I'm loving the songs. I'm not sure how to describe them, but we'll see. I'm going to release it next summer, I hope. Then I'm coming back to tour extensively. I'm going to do an extensive tour throughout Europe, South America and America."

On deciding to launch VUUR three years ago:

Anneke: "I've been in the metal scene for so long. After THE GATHERING, after I left THE GATHERING, I had some bands, my own bands, but I worked in metal with other people like Devin, like WITHIN TEMPTATION. I always felt like I wanted to really have my own band, to write my own metal songs, to have my metal, rock, or heavy outlet. So I formed a couple of years ago VUUR, we made an album. I feel so happy that I have my own outlet, my own expression of heavy music. The idea is to switch: heavy band stuff, with solo stuff, with band stuff, with solo stuff. Then, every once in a while, I'll work together with other bands, like AMORPHIS. I get to tour with them. I'm on their new album. I'm so happy to work with them and do these projects. It's keeping me busy."

On whether she misses fronting THE GATHERING:

Anneke: "When I was in THE GATHERING, it's a bit of a long time. When we started out, I was a child. [Laughs] I sometimes think back and I grew so much. We had a lot of experience with THE GATHERING. After, in my solo career, I've had a lot of experiences, so I grew up a lot, happily. I wouldn't want to go back to my youth, because I was a kid. I think life is better now because I'm a mother and it's a beautiful life. I make music and it's really wonderful. I look back on my GATHERING days with a lot of pride because we did some wonderful albums and wonderful music with some really, really good times on tours. We toured a lot. That was always my favorite period. My favorite times with THE GATHERING was on tour and being everywhere playing music. I was very happy with that period."

In late 2018, Anneke released "Symphonized", an 11-track live album record at two career-spanning concerts alongside Residentie Orkest The Hague, which saw solo tracks, as well as compositions from VUUR, THE GENTLE STORM and THE GATHERING, reimagined with the orchestra.