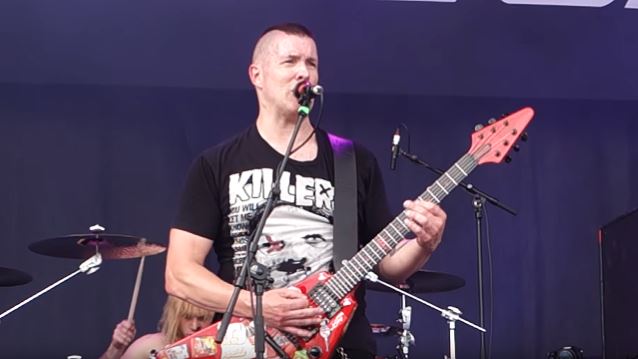 ANNIHILATOR's JEFF WATERS Talks Playing Guitar And Singing: It's 'Incredible' What HETFIELD And MUSTAINE Do

On September 10, Alex Stojanovic of Metal Master Kingdom conducted an interview with ANNIHILATOR mainman Jeff Waters at The Opera House in Toronto, Ontario, Canada. You can now watch the chat below. A couple of excerpts follow (transcribed by BLABBERMOUTH.NET).

On ANNIHILATOR's lack of a live presence in North America since the early '90s:

Jeff: "We did three records in '89, '90, and '93. They did very well in North America and especially the rest of the world. But '93 hit and most metal bands were dropped from their labels. It's a period of time that a lot of people don't remember, but literally record companies were sending out memos saying, 'Drop any band that has the word 'metal' in their bio.' Unless it was [in the] SEPULTURA, BIOHAZARD, PANTERA style, the newer metal style. We were all gone. Most of us from North America. I was lucky because a lot of bands did lose their deals everywhere, but ANNIHILATOR, our fourth record was bigger in Europe and Japan. It was the biggest in Japan, 'King Of The Kill'. That was cool. I was very lucky and it brought us to an even higher level. It was amazing at that point in our career. That sustained us through the traditional metal drought until the 2000s or whenever it seemed to come back. We just continued to put records out and we're working on our 16th studio record now.

"We kept putting records out and touring overseas, but couldn't get deals in Canada or the States. I just said 'Screw it. If I can't get in there, I won't be in there. Thank God I have a career somewhere else. People like what I'm doing.' It was the kind of music that wasn't popular in North America. It was typical '80s melodic heavy metal-meets-thrash metal and that's not what was going on. Besides the Seattle scene, like SOUNDGARDEN and ALICE IN CHAINS, you did have the newer metal with PANTERA, which was more of the hardcore [style], and MACHINE HEAD, they changed the style. That was popular. Fortunately, the rest of the world wasn't always based around trends or what was popular. They still honored the old-school stuff. Now that it came back years and years ago, I thought stupidly I could waltz back in, make some phone calls, send some e-mails, talk to some companies that I knew in the States and Canada and bring the band back and give it a shot. I knew I'd have to work hard at it, but I didn't realize the doors were politely slammed. It was always, 'Well, it's great you've had a good career going all of this time. But we're signing younger bands.' [They] are signing bands that are — I don't mean this in a bad way — stupid enough to sign these deals were labels are owning your merchandise, tour profits, publishing, owning the rights to your music. That went against me. Also, I was not playing the 'in' kind of metal music. We're not a new band, so labels are more prone to putting money into promoting younger bands and a whole list of things. Of course, some of it could be the music we were doing. Lucky for me, everywhere else has been going up and up. For the last ten years to playing at European festivals at two in the afternoon and six at night, and now literally co-headlining with even bands like SLAYER at some points. I've been very lucky for a 50-year-old guy from Canada to play traditional '80s metal and thrash and still keep going."

On if Waters will continue to handle vocals in ANNIHILATOR:

Jeff: "The first record I did vocals on was 'King Of The Kill'. That was at a time when we were dropped by our label Roadrunner and told our career was basically done. We got signed by Music For Nations and a Japanese label and publishers. It became a huge success. I had done that record singing because I always sing on the demos to give to the singers I've had because I write most of the stuff. I sing on it, and would send them the cassette of me singing and say, 'Here's the idea.' My friend and former co-writer on some 'Alice In Hell' and 'King Of The Kill' songs, John Bates, he said, 'Why don't you sing on it? I like your voice on the demos.' I said, 'I can't sing. I'm a guitar player.' I did it as a last resort. I didn't have another singer in mind. I did it and it became a No. 2 album in the main charts in Japan. That was ridiculous because I thought my career was over. That propelled me into having to learn how to play guitar and sing onstage and go on tour for a few years.

"I like the guitar most and it's very physically demanding to play guitar and sing. It give me ten times more respect for James Hetfield [METALLICA], Dave Mustaine [MEGADETH], who play and sing. It's incredible what they do, actually. But I didn't think about it. I hired some singers over the years who were really great. Dave Padden, our recent guy, was in it for 12 years playing guitar and singing. He was amazing, but left unexpectedly. We had no idea it was coming. It was for personal reasons. I decided, 'What the heck.' It's our 15th record. I didn't want to go through looking for another singer. There were a couple of guys I wanted to work with, like Stu Block, but he's already in ICED EARTH. I said, 'Yeah, I'll do it again.' But if I do it, I can't do with the attitude to just do the record. You got to take it seriously. I worked very hard and quickly. I didn't get into great shape; I'm slowly working on getting into shape. Again, it was a bigger album than we've had in more than 15 years. So, I'm stuck doing it and I think I'm going to have to do it until I physically can't do it or really show I'm not having a good time doing it. I love it. It's fun, but a lot of work. I'm not the greatest singer. I think it fits. You can always get a better singer in a band. There's always room in most bands for something to get better. But at this stage in my career, fans in Europe are saying 'Just stay and do it.'"

On reuniting with "Never, Neverland" vocalist Coburn Pharr for the 2015 installment of 70000 Tons Of Metal cruise:

Jeff: "I talk to him on Facebook and he calls me sometimes once every couple of months or month. We always talked and asked how we were doing in our personal lives. He asked how the band was doing and I asked how his business career was going, and, he mentioned it was 25 years since 'Never, Neverland' was released. I thought about giving it a shot and finding the old guys from the lineup. I got ahold of all the other guys carefully to see how things were going and found that three out of the five original guys from the album couldn't tour. So that idea was out the window. So I said, 'Why don't you come down to the boat cruise, relax and do a few songs?' He did two or three songs each time we played. It was amazing hearing a couple of those songs with his voice because he was the most amazing guy in that he had his own style. You knew it was him. He sang on our best record, our biggest selling one. 'Never, Neverland' is our best record, I think. He had his style and that's hard for a singer to find."