2016 has been a banner year for thrash masters ANTHRAX: the February release of the band's critically acclaimed eleventh studio album, "For All Kings" (Megaforce),two collaborations with director Jack Bennett for the grizzly music videos "Blood Eagle Wings" and "Monster At The End", a "Late Night With Seth Meyers" appearance that paired the band with the iconic Robert De Niro, and sharing stages with bands like SLAYER, IRON MAIDEN, SLIPKNOT, LAMB OF GOD and AVENGED SEVENFOLD.

But the celebrations are not done yet.

In support of Black Friday's Record Store Day (November 25),ANTHRAX will release a limited-edition seven-inch single pressed onto lilac and gold spatter vinyl (Megaforce) for the tracks "Monster At The End" and "Vice Of The People", the latter previously released only in Japan as a bonus track and being made available in North America for the first time.

In addition, an acoustic version of the band's song "Breathing Lightning", also on the "For All Kings" track listing, has just gone to radio. The song was performed and recorded at a special in-studio session at El Paso's rock radio station KLAQ-FM on October 27, the final date of ANTHRAX's recent North American tour with fellow "Big Four" members SLAYER.

The lyrical content of "Monster At The End" — "Your golden halo is burned and melted. Crown the monster at the end" — while not intended to be, sounds as if it could be an indictment on the current state of America, and a nation that has elected Donald Trump as its next president. Earlier in the year, ANTHRAX drummer Charlie Benante hesitantly spoke to Metalholic on the matter of politics. "There is a very scary vibe going on in our country and I'm almost afraid to even talk about it because of the division that there is," he said. "I don't know what's going to happen. I don't know, if, say, a Donald Trump does become president of our country, I don't know what will happen. I don't know how it's going to be perceived globally."

ANTHRAX will head to New York next month to co-headline (with MEGADETH) the 2016 Epiphone Revolver Music Awards on Tuesday, December 13.

As Benante put it, "ANTHRAX looks forward to blowing the roof off of the Revolver Awards and making metal GREAT again." 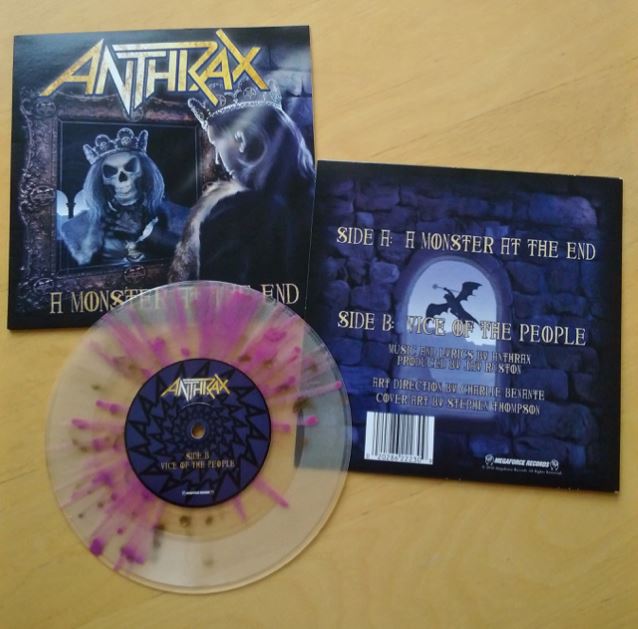