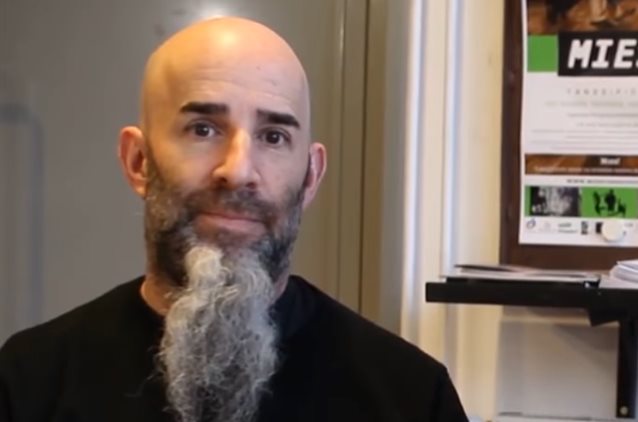 In a brand new interview with Finland's Kaaos TV, ANTHRAX guitarist Scott Ian spoke about the band's current European tour during which the group is celebrating the 30th anniversary of its classic album "Among The Living" by performing the LP in its entirety. He said (see video below): "Well, it's the album that essentially broke the band and kind of put us on the map around the world. [With 1985's] 'Spreading The Disease', we started touring the world, and I guess you could say that's the one that really kind of put us on the map. And that's not to ignore [1984's] 'Fistful Of Metal' — I know that's our first album and people first found out about us — but we didn't really tour much on 'Fistful Of Metal'; we did one run in the States, and we never made it to Europe on that record. It wasn't 'till 'Spreading' [that we first played in Europe]. But 'Among The Living' is the record that… We went from being a band that not many knew about to a band that a lot of people knew about. And, you know, [it was] the right record at the right time in 1987 when the scene we were a part of with METALLICA and SLAYER and MEGADETH, EXODUS… all those bands… METAL CHURCH, CELTIC FROST… I could name fifty other bands, but those being some of the main bands that… MERCYFUL FATE… that we were kind of coming up with at the same time. That's when the scene really started to break on a worldwide level, and a bunch of us little bands suddenly became big bands. And 'Among The Living' was the record… It really was the right record at the right time."

Ian also talked about the trend in recent years of artists — including ANTHRAX — playing cornerstone albums from beginning to end in concert and some fans' belief that it's nothing but a "cashgrab."

"I don't care [what other people say]," the guitarist said. "What isn't a money-grabbing thing? Who does anything for free? That's my question. So, no, I don't care. But at the same time, if you go to work, you should get paid for it. I don't think that's too much to ask. If you're doing a job, you should get paid. Regardless of what that job is, whether you play in a band or anything. If you put chairs in this room — whatever it is — you should get paid. So I never really understand the whole idea of something being a 'money grab.'"

"I think it's very confusing when people say that, personally."

ANTHRAX's European tour is scheduled to end in Paris on March 16.