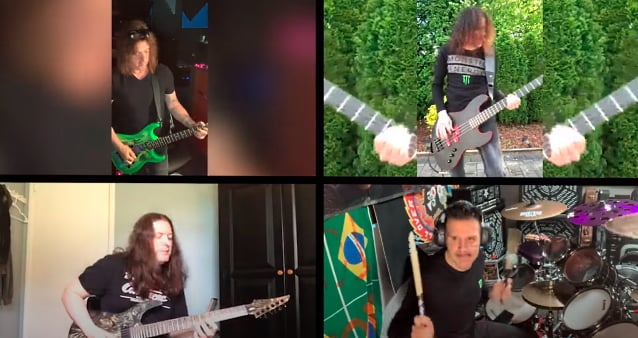 Benante uploaded a video of the performance to his YouTube channel, writing in an accompanying message: "IRON MAIDEN, Who doesn't know them? They changed the face of Heavy Metal, literally, with 'Eddie'. The 4 of us - SNAKE, FRANK and JON have so much respect for MAIDEN. They made every band that were influenced by them aspire to be Like them.

"When I was learning to play guitar, Practicing along with MAIDEN, AC/DC, PRIEST, etc helped my coordination get better and better. Transylvania had so many cool guitar parts and I learned them all (at least I thought I did ). MAIDEN had something different, they brought out that Primal roar from us. This was a New style of Hard Rock and Metal: they had a Punk Drive to them with BOSTON styled guitar licks. They changed the game! I often say, 'no MAIDEN, no Big 4'

"Here is our version of Transylvania, a Classic MAIDEN Instrumental that to this day makes the hair stand up on our arms! Up the Irons!

"'Oh well, wherever, wherever you are, IRON MAIDEN's gonna get you, no matter how far.' Scream for us YOU TUBE!!"