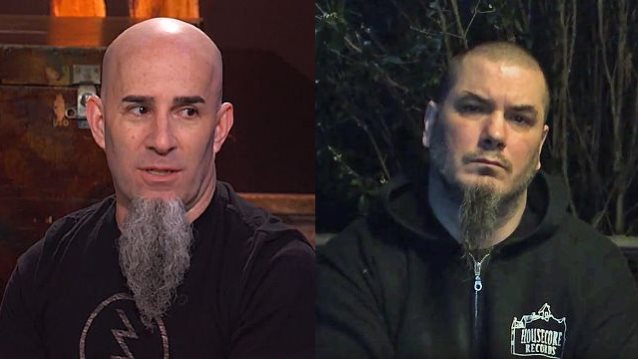 ANTHRAX's SCOTT IAN On PHILIP ANSELMO: 'He Needs To Prove That He Should Be Forgiven'

ANTHRAX guitarist Scott Ian has commented further on last month's incident when ex-PANTERA singer Philip Anselmo said "white power" and made the Nazi salute on stage. Anselmo later claimed he was referring to drinking white wine as part of an "inside joke" but has since released a video message, saying that he "deserves completely" the "heat" that he has been getting over his actions and claiming to be "a thousand percent apologetic to anyone that took offense to what [he] said."

In a message posted to Ian's personal web site in the days following the incident, the guitarist suggested Anselmo show how sincere he is by making a donation to Jewish human rights organization the Simon Wiesenthal Center. He also wrote: "Philip's actions were vile and that should be the focus here; anything else is just noise."

Asked by Australia's Sticks For Stones in a brand new interview if he thinks Anselmo should be forgiven for his actions, Ian responded (hear audio below): "Yeah. If he proves that he deserves to be, yeah. Just asking to be forgiven doesn't mean you should be forgiven. And I've had a running dialogue with Phil since this happened. It's not like I just posted something online without actually speaking to my friend. I've been having a dialogue back and forth with him. 'Cause if I didn't care, I wouldn't have contacted him at all. But I cared. Phil, I've known the dude almost thirty years. He's like a brother; he's family. And when someone in your family has a problem, you discuss it and you try and find a solution."

Ian went on to reiterate the fact that he wants to see Anselmo learn from the incident and realize the error of his ways.

The Simon Wiesenthal Center operates Museums of Tolerance across the world and, according to its mission statement, "confronts anti-Semitism, hate and terrorism, promotes human rights and dignity, stands with Israel, defends the safety of Jews worldwide, and teaches the lessons of the Holocaust for future generations."

Several other notable musicians have come out and criticized Anselmo for his actions, including MACHINE HEAD frontman Robb Flynn, who uploaded an eleven-minute video response to the incident in which he called Anselmo a "big bully" and described Philip's behavior as "fucking wrong."