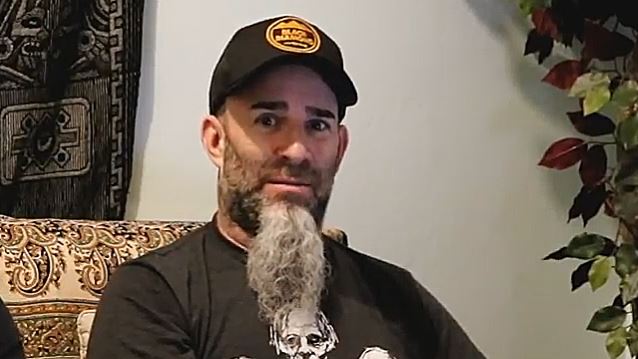 Brittney Patton of Arizona's The Eagle radio station recently conducted an interview with ANTHRAX guitarist Scott Ian. You can now watch the chat below.

Asked for his opinion of PROPHETS OF RAGE, the supergroup featuring members of RAGE AGAINST THE MACHINE, PUBLIC ENEMY's Chuck D and CYPRESS HILL's B-Real, Scott said: "I love that RAGE AGAINST THE MACHINE is still living in some way, shape and form; I think that's what's so great about PROPHETS OF RAGE. Those are songs that need to be played live and need to be heard all the time, especially this year, being an election year. So I couldn't be happier about that."

He continued: "I saw RAGE AGAINST THE MACHINE way early on at a tiny little club in Los Angeles, I think, even before they had their record deal, and I remember thinking a) this band is amazing, and b),and this is no knock on Zack [de la Rocha, RAGE AGAINST THE MACHINE frontman], because I love Zack in RAGE, but I remember thinking at the time — this was very early in the '90s; '91 maybe or… I don't remember exactly — but I remember thinking, 'If Chuck D fronted this band, they would be my favorite band of all time,' because the rhythm section was unbelievable, and then the idea of Chuck D's voice… Basically, the same idea why we wanted Chuck D and why we did 'Bring The Noise', because Chuck D's voice, to me, is the heaviest voice on the planet, so it should be backed up by a heavy band. And I remember thinking that all those years ago. So now all these years later, Chuck is playing with RAGE, so it's awesome."

ANTHRAX's collaboration with PUBLIC ENEMY on "Bring The Noise", which was featured on the 1991 "Attack of the Killer B's" compilation, has been credited for laying the groundwork for rap metal and nu metal.

In an interview with the Cleveland Music Examiner, Ian stated about ANTHRAX's original decision to record a cover of "Bring The Noise": "By that point, there was a new audience, and we certainly reached a lot of new people with that PUBLIC ENEMY track. People who maybe weren't into what we'd done before, or who weren't metalheads. So that track crossed over for us and took us into a new zone. But it's funny, because we haven't done anything rap or crossed over since 'Bring The Noise', yet people once again still talk about it, which shows me how special it was. People still want to hear it and people still reference it all the time, and it's almost 25 years old. And sometimes we're categorized as a 'rap metal' band, when we only ever did the two songs — other then maybe screwing around with 'Looking Down The Barrel Of A Gun' with the BEASTIE BOYS as a B-side — but yeah. People still talk about it as if that's what we do."