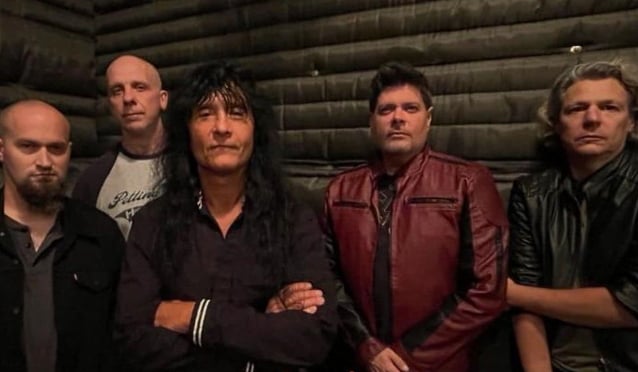 ANTHRAX singer Joey Belladonna will relaunch his JOURNEY tribute band called BEYOND FRONTIERS (formerly JOEY BELLADONNA'S BEYOND THE BAND and JOURNEY BEYOND) with three East Coast shows in December. The dates are as follows:

A year and a half ago, Belladonna spoke to "The Johnny Dare Morning Show" about his JOURNEY tribute, which also features keyboardist Doug Carter, bassist Paul Arntz, guitarist Matt Basford and drummer Justin Ward.

"We're working on some recordings so we can be like a normal band and put stuff up on the site — maybe do a video," Joey said. "We've got interest in playing shows. We're just trying to figure out when and how, that kind of thing. The band's still together. We record at home. Everybody's all in different places at the moment. We only did one show, so we can't wait to do it again, 'cause it's gonna be fun."

Belladonna's JOURNEY tribute made its live debut in March 2020 at The Beacon Theatre in Hopewell, Virginia.

Announcing the debut of Beyond Frontiers! An evening of Journey’s music, featuring Joey Belladonna.

JUST ANNOUNCED!! December 29, 2022, The debut of Beyond Frontiers! An evening of Journey’s music featuring Joey Belladonna!! Tickets on sale this Friday at Ticketweb.com or The Chance box office 845-471-1966 😎

Posted by The Chance Theater on Wednesday, October 26, 2022