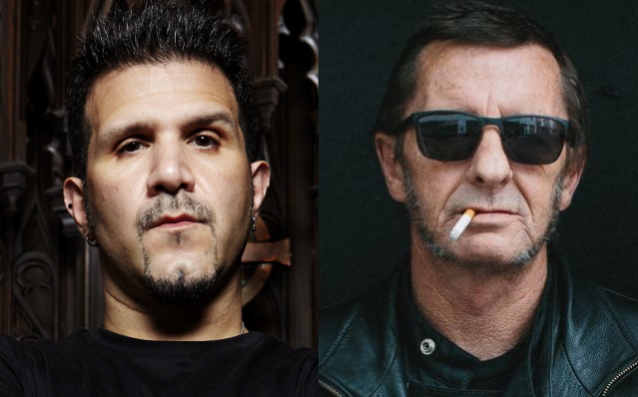 ANTHRAX's CHARLIE BENANTE: Why AC/DC's PHIL RUDD Is One Of The Best Drummers

On a recent episode of the "Talk Louder" podcast, hosted by veteran music journalist "Metal Dave" Glessner and lifelong hard rock/metal vocalist Jason McMaster (DANGEROUS TOYS),ANTHRAX drummer Charlie Benante spoke about his appreciation for AC/DC and drummer Phil Rudd in particular. He said (as transcribed by BLABBERMOUTH.NET): "AC/DC is probably in my top five of my all-time favorite bands. And Phil Rudd has always been one of my favorite drummers. And some people may go, 'Huh? What? Why?' Phil Rudd is an awesome drummer and is someone that I looked up to since I heard AC/DC.

"The way Phil Rudd approaches the songs and his meter, most drummers wanna fill in a song," he explained. "Phil doesn't fill [laughs] that much, and when he does fill, it's this nice, tasty [simple fill], and you just feel it. So he doesn't overdo it because Phil understands the role in the band. They all understood the role in the band, and the focus was Angus [Young, guitar]. 'So Angus is gonna do what he does, and we're gonna stay back here, and we're just gonna keep it [simple].'

"I've been in situations where I'll see some famous drummers trying to play an AC/DC song, and I'm just, like, 'Nah, it's not it. It's not it,'" Charlie continued.

"I would dare anybody to play a song like 'Let There Be Rock' and you keep it up all through the song. Don't fill; just kind of keep it going.

Charlie also recalled meeting Phil after an AC/DC concert a number of years ago.

"One night they played in town, and we both had the same cymbal company," he said. And there was a lot of back and forth about 'Charlie's coming to see Phil.' So when I'm in the room with him, Phil comes walking in. He's, like, 'Where's Charlie? Where's Charlie? Ah, there he is.' And we had this great conversation. And, of course, I was so happy that I got to take a photo with Phil. He's just awesome. He's the best."

Benante is not the first metal drummer to publicly voice his Rudd fandom. Back in 2017, METALLICA's Lars Ulrich told Baltimore radio station 98 Rock that he would pick Rudd to take over behind the kit for METALLICA if he was no longer able to play drums in the band. "He's been probably my main, biggest source of inspiration when we did the turn-away from the super-progressive stuff, the crazy stuff after 'Justice', when we got into the 'black album' and the 'Load' stuff, when it got a little more about the bounce and the riffs and the feel and the groove and all that," Lars said. "Phil Rudd, he's the top of that pyramid. Hearing Phil Rudd play behind James [Hetfield], that'd be pretty cool."

Benante's ANTHRAX bandmate Scott Ian has also been vocal in his appreciation for late AC/DC rhythm guitarist Malcolm Young, telling SiriusXM Volume's "Debatable" back in 2019: "Ask any guitar player — rhythm or lead guitar player — and they'll tell you Malcolm's the best; he's the best. Literally, his riffs and his approach to playing, his dynamics… His right hand was so percussive as a rhythm player, so the dynamics are just unbelievable. And it just cuts through in a way that nobody else, before, during or after, playing hard rock will ever, ever come close to, because no one else is gonna write those riffs again; they've already been written. You can't write those riffs again; it's impossible. Because then you'll just sound like a bad AC/DC ripoff."

As a young teen, Ian actually learned how to play rhythm guitar by listening and playing along to Malcolm.

"There is just an instant rush anytime I hear AC/DC," Ian previously told Gretsch. "It's like mainlined into my brain. As soon as I hear him playing chords, I just get excited, still, after all these years. If I put on 'Let There Be Rock', I feel the same now as I did 40 years ago. It moves me in exactly the same way."

The number of artists who consider Malcolm Young an inspiration runs pretty deep, but we're guessing not too many have gone so far to actually have his face inked into their own skin. Ian, though, has immortalized the late-great rhythm guitarist on his left bicep, along with his brother Angus Young on his right.

"Specifically, these guys, as a guitar player, mean everything to me," explained Ian. "That's why I really wanted them on me because it makes me happy to be able to look at them every day.

"Malcolm has always been my hero since day one because he basically taught me how to play guitar," Ian said. "As a kid with AC/DC albums, vinyl albums, in my little bedroom on a turn table, I just used to sit and figure out how to play their songs. And it was all Malcolm. You know? It was all him. So, I was learning to play specifically by listening to what he was doing. He was my guitar teacher. He was the reason I learned how to play rhythm guitar the way I do."