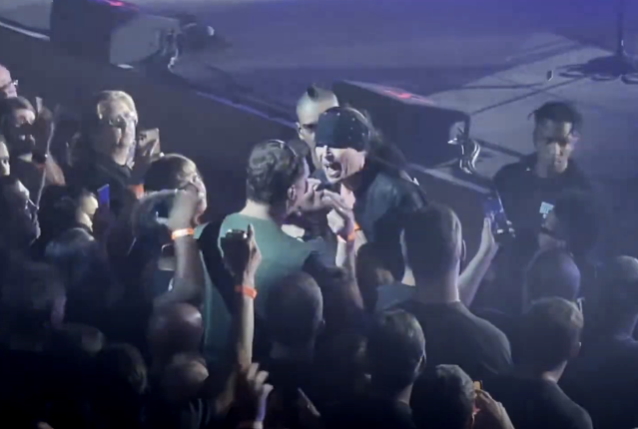 THE CULT singer Ian Astbury jumped into the crowd during the band's concert Tuesday (July 19) to break up a scuffle between fans. According to TMZ, the incident occurred as THE CULT was performing the song "Rain" at The Anthem in Washington, D.C. The disagreement stemmed from the fact that a tall man in the front was blocking the view of the person behind him, resulting an altercation between the two. In video of the incident, which was uploaded on the Creative Underground YouTube channel, Ian can be seen coming down from the stage and breaking up the fight before hugging it out with the man who was allegedly put in the chokehold. Ian then returned to the stage and admonished the aggressor, saying: "Brother, never ever put a chokehold on somebody. It's not fucking cool… Stop crying. It's a fucking rock show. You don't like it? Go stand at the back. You're tall. You're bigger than everybody. You're standing at the front of a rock show. What do you think?"

As previously reported, THE CULT will release a new album, "Under The Midnight Sun", on October 7 via Black Hill Records. The LP was produced by Tom Dalgety (PIXIES, GHOST, ROYAL BLOOD) and was preceded by the Juan Azulay-directed music video for the first single, "Give Me Mercy".

"We're dropping some breadcrumbs to give a taste of what's coming with this album," Astbury told Dayton.com. "It is a different animal. It destroys [2016's] 'Hidden City' and anything else we've done in quite a while. We dug deep and put a lot of blood, sweat and tears into this record. It's a brave new world out there and we want to be a part of it, but you don't get to be a part of it unless you're doing your best work. There are no free passes for anyone. You're only as good as what's happening today."

Ian went on to say that the coronavirus pandemic gave him and guitarist Billy Duffy more time to work on the material with Dalgety.

"We got the opportunity to really let songs be fully realized," Astbury said. "Usually, pre-pandemic, you're on a cycle of tour, record, tour, record, tour, record, but with this album, we had a lot more time for introspection. A lot went into this record. I believe the subject matter and the sound of it will resonate with people. True to form, we're not repeating ourselves. There will be some familiar stuff, but it's not like people will be able to access it very quickly. It's very strong on content. There are strong guitars. It's quite visceral, very emotional, because it's channeling the moment. I guess it's our take on that."

Following THE CULT's co-headline U.K. arena tour alongside Alice Cooper in May, the band's North American tour kicked off in St. Paul, Minnesota and will conclude July 30 in Orillia, Ontario, Canada.

In May 2020, it was announced that THE CULT had inked a deal with Black Hill Records.

Prior to the pandemic, THE CULT spent most of 2019 touring in celebration of the 30th anniversary of its "Sonic Temple" album. The LP catapulted THE CULT into superstar status and remains their most commercially successful release. It has sold over 1.5 million copies in the U.S. alone and was certified platinum in 1990. It made it to No. 10 on the Billboard chart, and several of the album's songs remain rock-radio staples to this day.