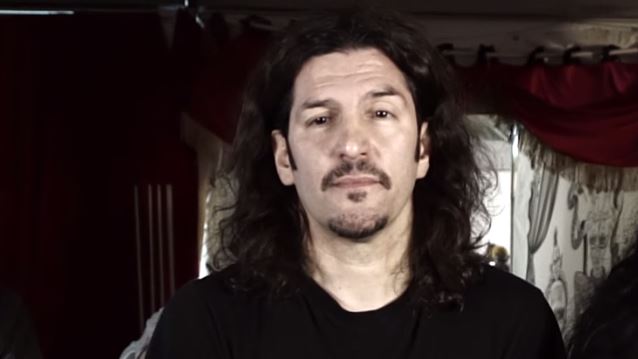 ANTHRAX bassist Frank Bello says that he has "no issues" with the band's former singer John Bush, even though the two haven't spoken in more than half a decade.

Bush fronted ANTHRAX between 1992 and 2005 but was sidelined when ANTHRAX reunited with Joey Belladonna for a 20th-anniversary tour. When that collapsed, and relationships disintegrated with next frontman Dan Nelson, Bush returned for a time before Belladonna took the job back in 2010.

Bush, who recently released a new album with ARMORED SAINT, has lamented the fact that he hasn't spoken to Bello and ANTHRAX drummer Charlie Benante since he told the band they would have to pay him a "crazy" amount of money if they wanted him to sing on what turned out to be 2011's "Worship Music" album.

But, according to Bello, there is no particular reason for the lack of contact between him and Bush other than the fact that the bassist has been busy focusing on recording and touring with ANTHRAX as well as taking care of his family.

"You know, it's funny. I love John. I have no issues," Bello told Canadian rock journalist Mitch Lafon (hear audio below). "John is a friend of mine. I love John. See, I never had that thing… I can speak for me. I have no issues. Honestly, I have a family, and when I'm home [laughs], ask anybody, I don't come out of my house. [laughs] I kind of just stay with my family and I write songs at home. I have a side project called ALTITUDES & ATTITUDE [with MEGADETH's David Ellefson] that I do, and that's just what I do. And a lot of my friends, quite honestly, say, 'Why don't you call?' It's just one of those things."

He continued: "I think when you have a family and stuff, you just get in that whole cycle off the road, you just kind of close yourself off. And this is no disrespect to anybody. I truly love John Bush. And I love the new ARMORED SAINT record ['Win Hands Down']. Joey Vera [ARMORED SAINT bassist] is a good friend of mine, and I told him I love that record. I think it's sounding great, I think John is singing better than ever. And they're good friends of mine, so I wanna see them do well."

"Anybody who knows me, I don't… I like everybody, pretty much. I have no problem [with anyone]."

ANTHRAX recently completed work on the follow-up to "Worship Music" for an early 2016 release.