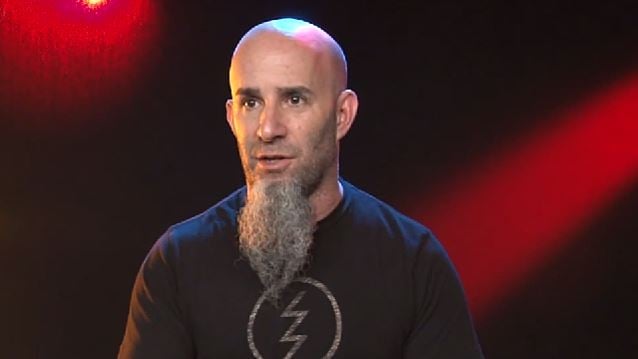 In a recent appearance on MÖTLEY CRÜE bassist Nikki Sixx's "Sixx Sense With Nikki Sixx" radio show, ANTHRAX guitarist Scott Ian recalled one of the more painful passages from his recently released autobiography, "I'm The Man: The Story Of That Guy From Anthrax", involving his parents during a particularly turbulent period in his life.

"There is a story in the book about how my dad had to stop my mother from jumping out of a moving car," Ian said (hear audio below). "He knocked her out… he punched her in the face and knocked her out and drove her to the emergency room. I just learned that three months ago or something."

According to Ian, he found out about the incident through his co-author, Jon Wiederhorn, who previously worked on the books "Louder Than Hell: The Definitive Oral History Of Metal" and "Ministry: The Lost Gospels According To Al Jourgensen".

Ian said: "[Jon] said [to me], 'Hey, man, when I did the Al Jourgensen book, I actually interviewed Al's dad to fill in some holes in [Al's] childhood.' And he goes, 'So what do you think if I interviewed your mom and your dad? And it'll all just come from your point of view in the story.' And I was, like, 'Yeah, that sounds like a cool idea.' So he interviewed my parents, and I found that out. I'm, like, 'Holy crap! I'm 50 years old and I'm just finding this out now.'"

Asked what his initial reaction was when he learned about the episode, Ian said: "I've gotta admit, I was a little bit pissed off at my mother. [Laughs] Truthfully… Not even so much that I didn't know. This happened early on… Not that early, but this was in 1975, so I was 11. This was, like, when my parents were… My parents had split up, my mom's mom died — my grandmother had passed away — and my mom was going through a hell of time. Also booze and drugs and all that [were involved]. I knew things were bad — I have all my memories of that time — I just didn't know they had gotten that insanely bad. Like, I had no idea that she had gotten that far. I just think my initial reaction was kind of, like, 'Really? She wanted to do that and not be there for my brother and I?' So, initially, I did get a little bit pissed off, but I got past that pretty quick, because my mom's 77 years old and she's doing fine, so I'm not gonna be mad at her for 1975."

Ian said that his family — including his mother and his wife, Pearl Aday (daughter of legendary crooner Meat Loaf) — has been very supportve of his decision to publish his autobiography. He said: "My mom's read it, and we haven't really talked about it all that much. She actually said… I did one of my talking shows in L.A. last week, and [former ANTHRAX singer] John Bush was at the show, and he was talking to my mom after the show, and I guess she made some kind of comment about how she loves the book except for pages 1 through 26. [Laughs] But, you know, this is all… It's all… A lot of it is from her mouth, as well as my dad's and mine. There's nothing false in there; it's just the reality of it. I guess the fact that it's in the book is not that thrilling, but at the same time, she stood in line at my show and bought a copy of my book and had me sign it. I'm, like,'What are you doing?' [She stood there] with a big smile on her face."

"I'm The Man: The Story Of That Guy From Anthrax" was released on October 14 via Da Capo Press.