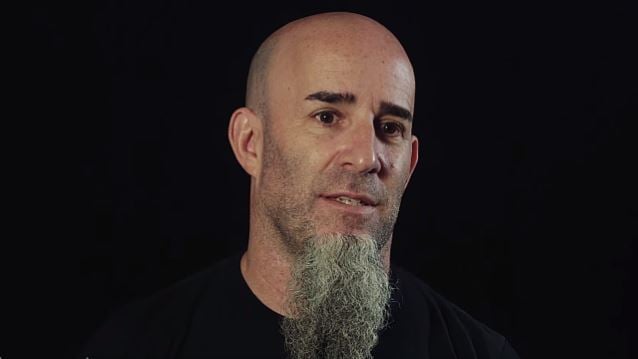 ANTHRAX's SCOTT IAN On Seeing AC/DC With AXL ROSE: It 'Was Two And A Half Hours Of Perfection'

ANTHRAX guitarist Scott Ian says that the Axl Rose-fronted AC/DC concert he caught in New York City was "one of the best rock shows" he has ever seen.

AC/DC postponed the last ten dates of its North American tour two years ago after doctors told singer Brian Johnson he faced a total loss of hearing if he did not stop touring immediately. AC/DC completed the tour in the summer of 2016, with the GUNS N' ROSES singer as a "guest vocalist" and Johnson seemingly not returning to the group.

During an appearance on the "Appetite For Distortion" podcast, Ian was asked what he thought of seeing AC/DC perform with Rose. "I'll be completely honest: when I first heard that Axl was gonna do shows with AC/DC, I just wasn't feeling it," he admitted (hear audio below). "I can't tell you why other than maybe because I'm just such an AC/DC fan for so long and it just seemed weird to me that all of a sudden Brian was pushed to the wayside. And like a lot of AC/DC fans, I think that was kind of a bitter pill to swallow. So I was kind of like, 'Ehhh…' It's not my band. I get it. I'm never gonna be the guy to tell someone else how to run their business; I understand it. But as a fan, I don't have to buy into it — no one's forcing me to buy into it. But it turns out we get to have a night off on tour and it turns out we're close enough to New York to go see AC/DC at Madison Square Garden. And then Axl was kind enough to… A friend of mine who knows Axl and his assistant was kind enough to get a bunch of us on the guest list for that show. And I can't speak highly enough about it.

"And even before that… I'm sorry, I skipped a step," he continued. "I saw a clip online — I can't remember from where — but I saw Axl singing 'Riff Raff' with AC/DC and it blew my mind how great it was. [I was] just like, 'Holy crap! That's perfect! It's perfect!' So then, of course, I got excited about the show. And then the show itself was two and a half hours of perfection. I've gone on record: it's the best AC/DC show I've ever seen. And I headbanged for two and a half hours, which is about an hour longer than I even headbang in an ANTHRAX show, so I actually, even on a night off, I worked harder at the AC/DC show [laughs] than I normally would at one of my own gigs."

Ian added: "It was incredible — one of the best rock shows I've ever seen. I can't say enough about it. The setlist was mindblowing and Axl was note-perfect on all the Brian and the Bon [Scott] stuff. His passion for it was obvious. It was incredible — it was really, really an incredible night.

AC/DC's future remains in doubt after the band completed its world tour in support of 2014's "Rock Or Bust", a cycle that saw a massive turnover in the group's personnel. Guitarist Angus Young has not yet indicated whether the group will continue recording and touring.