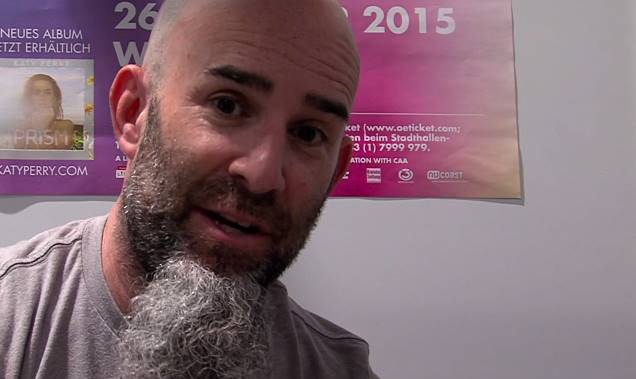 Austria's Mulatschag TV recently conducted an interview with ANTHRAX guitarist Scott Ian. You can now watch the chat below.

Asked what it was like sharing the stage with legends like "Dimebag" Darrell Abbott (PANTERA) and Roger Daltrey (THE WHO),Ian said: "First and foremost, Darrell was a friend of ours; we go back a long time. And so, any time we got to spend with Darrell was just always a lot of fun, whether it was just hanging out or going to the movies, or going out drinking or strip clubs, or playing in the studio, or on tour together."

He continued: "It's weird, because I never thought my time with Darrell was gonna come to an end, and so, when I look back on the 19 years that I was friends with him or something, that time becomes even more special now. Any time I got to spend time with him becomes really special because he's not here anymore, obviously. He was such an amazing human and just so much fun to be around all the time. If you never got to meet him, it sucks, because in my life, he was someone who was really, really special — one of those people that you meet and you just love being around that guy. Any time you were in a room with Darrell, he made you feel better. Ronnie Dio in much the same way — Ronnie was a guy who just made you feel great when you were around him. He always made sure to take care of everyone else around him first. He was just such a great host and such a lovely man and always had something great to say. And after you'd be with him, you'd just be, 'Goddamn, I love being around that guy.' You just felt better about yourself afterwards. Ronnie and Darrell were very much the same way — just amazing people to be around. Roger Daltrey, too — there's a dude I never thought I would meet in my life. And I got to hang out with him a bunch. Same thing, too. Talk about a guy who's got stories, man. The guy starts telling you stories about sitting in a room watching Jimi Hendrix playing the whole BEATLES 'White Album', like, the day it came out on his guitar, and George Harrison is standing right there singing the parts, and I'm, like… You know, it's hard to get your fucking head around it. There's someone who should tell stories on stage. Yeah, he's a fucking legend.

"It's literally, like… I'm not a religious man, but when you're standing in a room with guys like that and guys like Jimmy Page and Gene Simmons and Paul McCartney… I got to meet Paul McCartney one time. I didn't have a conversation, but I shook his hand. And that was, like… It's the closest I could compare to, like, gods that are walking the earth with us. Granted, I know they're just humans that fucking bleed the same color I do, but the shit they've done and they've experienced in their lifetimes, it just can't be touched."

ANTHRAX will release "Chile On Hell", a live-in-concert DVD, on September 16. The footage for the disc was filmed at the Teatro Caupolican in Santiago, Chile on May 10, 2013.