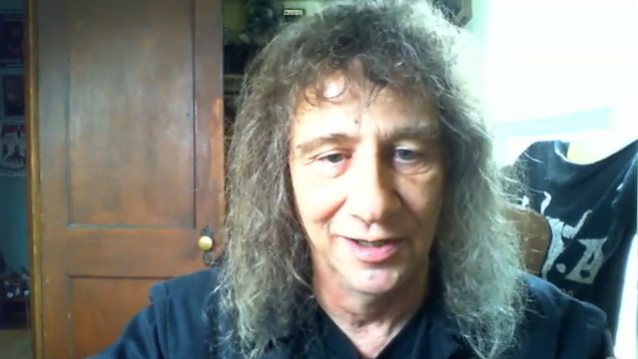 In a new interview with Chris Akin, Steve "Lips" Kudlow of Canadian metal legends ANVIL spoke about how COVID-19 travel requirements have affected his band's ability to tour the U.S. He said (as transcribed by BLABBERMOUTH.NET): "Normally we have a t-shirt sales person. And what happened was they refused to get vaccinated so we can't take him with us. 'I wanna take you with [us]. Just go get your [vaccine].' 'I'm not getting a vaccination.' 'Well, why?' 'I don't want one. I don't trust [the vaccine].' And there's lots of people that don't. But, unfortunately, we have to be able to have somebody selling our merchandise every night. And we can't get to a gig and say, 'You're sitting in the van tonight.' That's not gonna work.

"Let's face it: that person is now a fucking… they're a walking timebomb," Lips continued. "It's only a matter of time till they get sick. They're not vaccinated. How long is it gonna take them to get sick? I mean, there's a chance that we're all gonna get sick, but they could get really sick. It's, like, 'We can't take you with us.' That shit fucking bothers me — it bothers me a lot — but there's nothing I can do about it. I can't change the world."

"If you're gonna walk around being unvaccinated, then expect there's gonna be doors slammed in your face," Lips added. "That's what comes with it. I can't fucking change it. And don't blame me — blame yourself. You're doing it to yourself."

Earlier this month, Lips told The Bay Ragni Show that he "just got over COVID". He explained: "[It was] my second case, and it was, like, 'That was COVID?' I tested positive, and to me, it was nothing more than two days of uncomfortable sniffles. Everybody else, run for the hills, and a bunch of people got sick from me too, man. And it's not like I knew… I didn't even know I was sick. But that's the problem with it. I'm all jacked up — four shots [of the COVID-19 vaccine]. So I got the four shots, and the shots were worse than the fucking disease — way worse."

Asked what it was like the first time he contracted COVID-19 back at the start of the pandemic in March 2020, Lips said: "Oh, the first time I had it, I knew I had it and I was sick for a month. It was fucking brutal, man. You couldn't get better. You kept hoping you'd get better, but you didn't get better, and it would get worse. And what I mean by worse… We're talking about muscle pain and back spasms. It gave me a back spasm. You wake up and you can't even… I'm trying to breathe in and I can't breathe in because I'm having a spasm in my back. I had to sit there or lay there and just kind of quiver from the pain and then just slowly relax my muscles so that I could at least [get through the day]. That was a nightmare. The first time was really fucking scary, man… So I was pretty lucky, I guess. I mean, lucky in the sense that it didn't go to my major organs or destroy my lungs. But the first bout was… It's not even remotely the same. It's two different things. Whatever I experienced that first time to what just happened now [after I got vaccinated], it's, like, fuck, I didn't even know I was sick [this second time around] — I didn't even know I was really sick. I just kind of felt tired. My wife goes, 'Let me check it.' I go, 'I don't know. I don't really feel sick.' [She goes], 'Let me check it. You just tested positive. Get the fuck upstairs.'"

ANVIL's new album, "Impact Is Imminent", arrived on May 20 via AFM Records.

ANVIL, a Toronto-based group, was formed in 1978 by childhood friends Kudlow and drummer Robb Reiner. Both came from Jewish families and had been playing music together since their teens. ANVIL is considered to have been an influence on many metal bands, including METALLICA, MEGADETH, SLAYER and ANTHRAX.