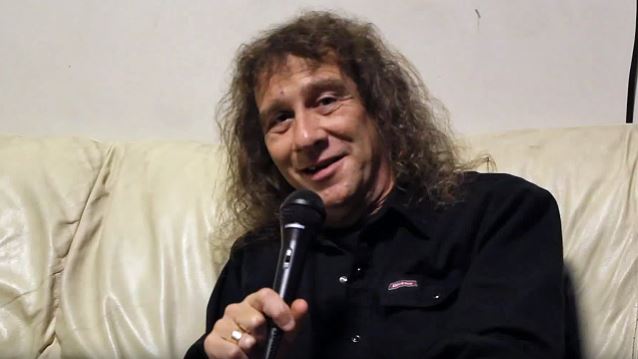 In a brand new interview with The Rockpit, guitarist/vocalist Steve "Lips" Kudlow of legendary Canadian metallers ANVIL recalled a funny incident from the road involving iconic MOTÖRHEAD frontman Lemmy Kilmister. He said: "Probably in 1983, while we were on tour with him, he invited me up to his hotel room, and he says, 'Come up and have a couple of drinks.' So I said, 'Sure, man. Fucking great!' So we sat down and he pulled out a forty-ounce bottle of vodka and a couple of crates of orange juice and these big tall glasses that probably hold twenty ounces of fluid. So he fills it up with about ten ounces of vodka and then tops it off with orange juice, and then we start drinking. Of course, I get about three or four shots in, and I'm fucking wasted because I'm not a drinker. So he goes, 'You're starting to look a little buzzed there, Lips.' So he pulls out a little leather pouch and a pocket knife and dips his pocket knife into this white powder, and it's fucking amphetamines; it's fucking speed. And he sticks it right under my nose and he goes, 'Fucking sniff, right!' And it's like [I consumed] no alcohol. I'm straight as a fucking judge! 'Wow! Okay, this is cool!' We keep going and keep going, and the next thing I know, there's a knock on the fucking door and it's the tour manager. And he goes, 'Time to go to the gig, guys.' And it was supposed to be our day off. And I'm, like, 'We're on our day off. What do you mean go to the gig?' And he goes, 'Guys, you've been sitting in here for 24 fucking hours. Get your shit together and let's go!' 'What happened?' [Laughs] So I get to the gig and I can barely fucking walk, I'm so fucked up. And Lemmy walks in and takes a look at me and goes, 'You're looking fucking knackered, mate. Maybe you oughta try one of these.' He pulls out a little plastic bag and it's filled with little black capsules, and he says, 'These are called black bombers. Take two.' And I go, 'You know what, Lemmy? After last night, I'm only taking one!' Well I ate the pill, and fuck, I did the gig! I could have done five! [Laughs] All my hair stood on end. And I go, 'Holy fuck!'"

He added: "Hey, when in Rome, you do as the Romans. When touring with MOTÖRHEAD, you do as MOTÖRHEAD. That's what happened. Now I know what 'No Sleep 'Til Hammersmith' meant. [Laughs]"

ANVIL will release its new album, "Anvil Is Anvil", on February 26 worldwide (excluding Japan) via SPV/Steamhammer. The album will be available on digipak CD (incuding one bonus track and a poster),2LP gatefold clear version and as a digital download.

"Anvil Is Anvil" was recorded in October at Redhead 4 Studios in Pulheim, near Cologne, Germany, with producer Martin "Mattes" Pfeiffer. According to a press release, the CD is "an unambiguous, uncompromising recording, typical of this band. At the same time it's fresh, occasionally surprising and generally exciting through and through. A stalwart metal manifesto by a band who stand for authenticity and credibility like few others in this fast-lived business."